Saint-Véran in the Queyras (Hautes Alpes) is a village where they say that “the cock pecks at the stars”. Situated at 2,042m, it’s the highest commune in Europe. Above it at 2,400m, in the land of marmots and chamois and close to the Chapelle des Clausis, you can find the remains of an old copper mine.

A history stretching back 4,400 years

We start at the end of the 3rd millennium BCE, the Stone Age is coming to an end, we are into the Copper Age, and the Bronze Age will soon make begin. With copper, men will start to make jewellery, kitchen utensils, tools and, not least, weapons. It was soon discovered that the addition of tin to the copper created bronze, which not only hardened tools but also weapons, giving a significant advantage to warriors equipped with shields, armour and lances made with the new metal.

How did people of that time discover the vein of copper ore? How did they use their stone tools to mine it? How did they come by the knowledge which enabled them to obtain this precious metal? Where did they live at the time? It is very difficult to answer these questions. What the archaeologists do know is that a trained eye can see traces on rocks which mark their houses and hearths. 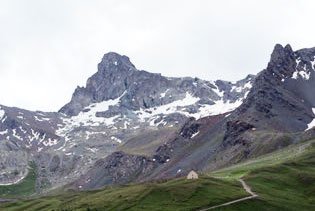 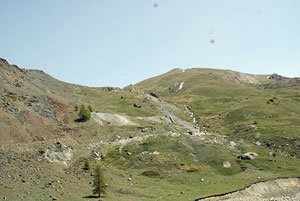 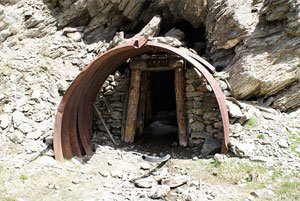 The Romans knew about the copper mine at Saint-Véran. This is evidenced by the coinage of Antoninus Pius (Roman emperor from 138 to 161 AD) found at the entrance to a mine gallery. By this time the original ore outcrop was exhausted and it was necessary to dig deeper and deeper into the ground to follow the vein, which became almost vertical. 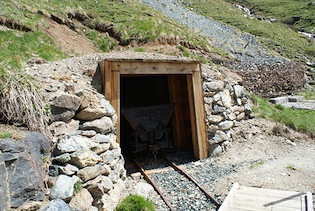 You can imagine how difficult this was, high in the mountains at an altitude of 2,400m, in the cold and snow, and plagued by ice at the start and end of winter. And the difficulty of transporting the ore down into the valley, certainly on men’s backs, maybe using mules. It makes you wonder about the working conditions of the miners. Were they locally recruited? What was the significance of the village which would one day become Saint-Véran? Was the labour force imported?

Mechanisation in the 20th Century 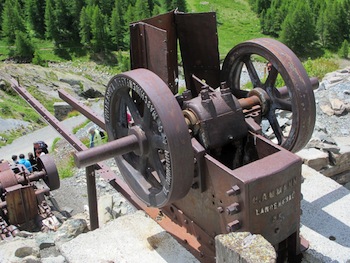 In 1901 efforts to exploit modern mining techniques began; blasting using explosives, transport of spoil and ore by railway wagons, mechanical ore crushing and washing. The mine galleries were extended as it became necessary to follow the vein deeper and deeper into the mountain. The ore wasn’t treated on site but sent to smelters such as at Vedène in the Vaucluse or at Swansea in South Wales. In 1957 the torrential rains which caused so much flooding and destruction in the Queyras also caused a landslip which carried a substantial amount of the mining equipment to the bottom of the valley. Misfortunes never come in ones, and this was followed by an accident which killed two men and then by an explosion which seriously damaged the engine room. The cost of putting the mine back into production was prohibitive and it was closed in 1961. 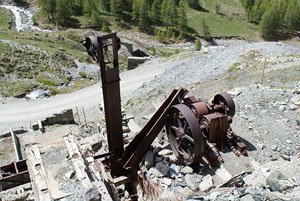 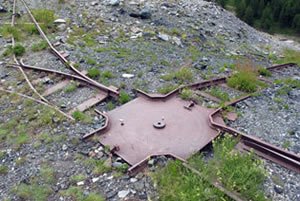 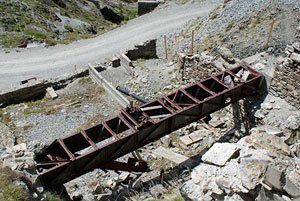 Copper can be found in its native, almost pure, metallic form. It is assumed that it was in this form that copper was discovered at Saint-Véran at the end of the Stone Age. Samples of native metallic copper were found by miners in the 20th Century. 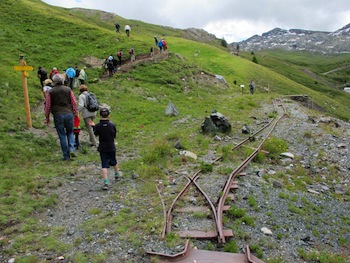 Most frequently, however, copper is found in the form of an ore, copper sulphide mixed with iron and other minerals such as gold, silver and platinum, all as an inclusion in rock “gangue” (spoil or waste). At Saint-Véran the ore (bornite – copper sulphide and iron, Cu5FeS4) is scarce but surprisingly rich in copper, almost 40%. Compare this with Chile where it is exploited in enormous open-cast mines but the ore only contains about 3% copper.

To recover the copper you must first separate the ore from its gangue. This is done by sieving, crushing and grinding, and produces a coarse powder which is then washed and decanted to obtain the pure ore. It is likely that ore processing at Saint-Véran in the Bronze Age stopped at this point because there are very few signs of the existence of copper extraction ovens.

To separate the copper from the iron contained in the bornite you have to heat the concentrate, mixed with silica, to 1,300C. The silica forms a slag with the iron, which floats on the surface of the molten copper and is easy to remove. Obtaining such a high temperature was a difficulty which men at the end of the stone age had to overcome. They built efficient smelting ovens driven by bellows with nozzles. Such nozzles have been found at the Chapelle de Clausis, only a stone’s throw from the mine… but the archaeologists have yet to uncover the actual process used by the ancient miners. 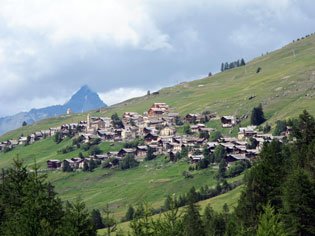 We would highly recommend a trip to the copper mine, where children will enjoy walking in the footsteps of the miners. The site is magnificent, the tour of the mine informative. 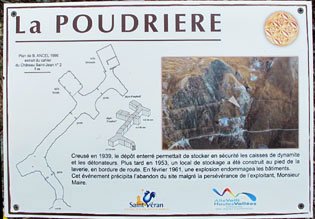 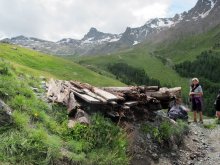