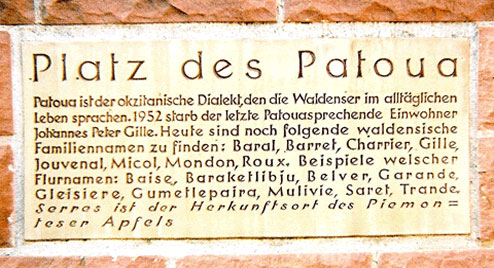 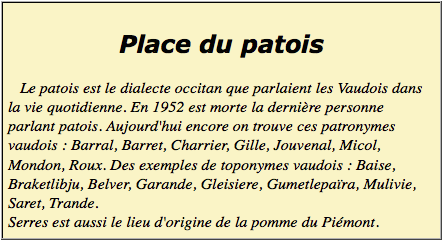 Many families in the Queyras and the neighbouring Alpine valleys of Piedmont had to leave everything behind - their houses, their lands, their cattle – and flee with a meagre bundle of belongings to more hospitable lands.

For them, in fact, this was just one more hardship, because their fathers had described in detail the suffering they had experienced because of their faith, which was not the same as the King’s.

They expected to come back, once the storm had blown over.

At least that’s what they believed.

They left quietly like thieves in the night to avoid alerting the neighbours, and knowing that if they were caught the men would be sent to the galleys and the women imprisoned for life, their children snatched from them and brought up in another faith. So they walked.

At the mountain pass, they turn for a last look at the land of their ancestors, the land of their birth which has turned against them – and then they walk on. Along the way they meet other fugitives who have lived on the other side of the mountains - people who speak the same language and whom they’ve met at local fairs. They walk with them. Old ones die, children are born. It’s so difficult to find something to make a shroud or swaddling clothes with. But they don’t delay. They keep on walking, walking. 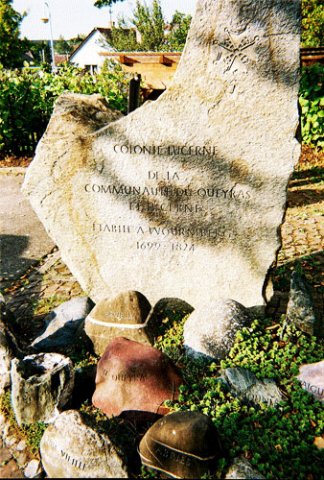 They arrive in Switzerland, but Switzerland can’t give refuge to so many. So they walk on, until, six years later, they arrive in Bad-Württemberg, in Germany, where the local authorities suggest that they might settle in ruined villages, villages abandoned because of the Thirty Years War, looting, famine and epidemics. He gives them land, not rich land, but land nevertheless.

And they set to work, safe at last from their persecutors. Not all are lucky enough to get a house, but never mind, it’s possible to dig a hole and cover it with branches – it’s a shelter. Four hard years pass before everyone is properly housed. But they are all sustained by their faith; they know that there is a light in the darkness. They aren’t necessarily of the Vaudois denomination, but they don’t worry about that – they are happy to be called Vaudois. They thank the Lord who has led them to this place of safety. 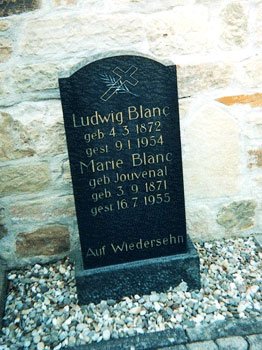 Today their descendants remember. In Serres, a tiny hamlet in Würmberg, the village square that they have rebuilt is named Patois (Dialect) Square, even if their Occitan dialect is no longer spoken. And when in 1840, a shameful decree imposed the use of German in schools, the parents of these descendants kept to their dialect in matters of administration and in their church services for more than a hundred years. And in their wardrobes, the women have religiously kept the dresses, head-dresses and white shawls that their ancestors brought from their mountain valleys. In Würmberg itself, near the Protestant church, they have made a monument out of the stones from the River Guil; and on it they have carved the names of the villages of their forebears. 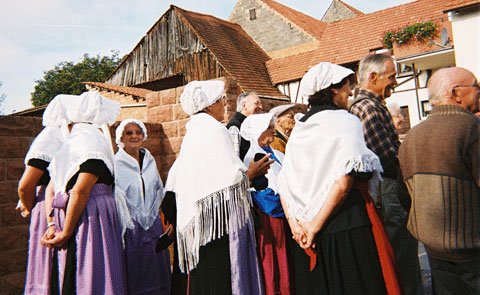 So today, when people from the Queyras come visiting, they are welcomed with open arms. After all, don’t they have the same names as the ones they’ve seen on the gravestones in the cemetery? And many of them have already met some of these visitors on official ‘Return to the Queyras” trips and on other occasions. Of course, there’s something of a language barrier now, but when you’re speaking from the heart you find the right gestures. So – it’s time for the group photograph, with arms round shoulders, smiles and hands held for a long time.

“See you soon!” “Yes, see you soon, either here or in the Queyras, that’s a promise!” And a little tear is wiped away.

Two words which mean the same in either language, and they are deeply felt.

The Queyras in Carlsdorf, Germany

When the Edict of Nantes was revoked, many loyal Protestant Queyrassins abandoned their homes and went into exile. Many of them settled in Germany, notably in Baden-Württemberg and in Hesse. Carlsdorf is a hamlet in the commune of Hofgeismar, in Hesse. Seventy per cent of the inhabitants of this village are descendants of French Huguenots, many of whom were Queyrassins.

In 2010 a group from Carlsdorf came to spend a few days in the Queyras. The next year, from 2nd to 5th June 2011, the “Return to the Queyras” Association reciprocated with a visit to Carlsdorf. There was a lot of emotion, friendships were renewed, and people visited each other. The area of land used by the Queyrassin exiles in 1686 is still there. Signs explain who were the first people to live there. 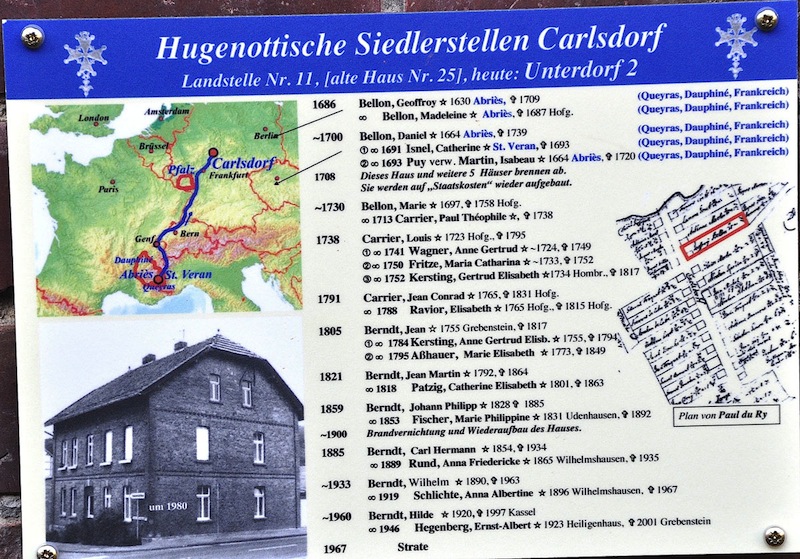 The German Huguenot houses bear signs like this one.

“In 1686 Geoffroy and Madeleine Bellon, both from Abriès, were the first occupants of this house. Then around 1700 Daniel Bellon from Abriès followed, with his first wife Catherine Isnel from Saint- Véran, and his second wife, a widow, Isabeau Martin from Abriès.”

In 1707 the house burned down along with five others, in a fire started by a child from a village barely three kilometres away. Germans were exhausted by the Thirty Years’ War, impoverished and struggling to pay the state taxes, from which the new arrivals had been given a ten-year exemption. Hence there was some jealousy and resentment.

But the destroyed houses were rebuilt, as the signboard says, at the state’s expense.

The warm welcome given to the French at the town hall by Heinrich, the Mayor, (who had led the group the year before) was the occasion for the visitors to express their delight and their gratitude… 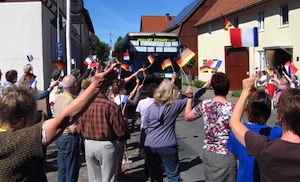 In your welcome speech you used some powerful expressions referring to mutual understanding, respect and tolerance, which were music to our ears.

You’ve thanked us for coming, and we thank you in return. The English have a good way of putting it: ‘Nice to meet you’ – and it’s nice to get to know you, it’s sad when we have to leave, and it’s lovely to meet up again.

When our coach arrived in Carlsdorf, we were delighted to see so many villagers waiting for us and so many friends amongst them. And the children waving French and German flags, often in the same hand. The message of friendship is clear.

But in order to get to know one another, it’s even better to live together. So from the bottom of our hearts we thank all those who have opened their homes to us so hospitably.

You even seem to have fixed the weather: last year when you were in the Queyras the sky was lowering, grey and rainy, but today could not be more different, with sunshine, blue sky and a warm breeze. You’ve organised everything very well. I’m not jealous, just full of admiration. Un big “Bravo!” 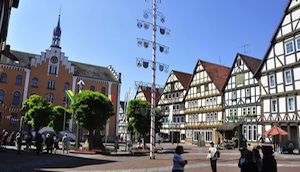 Just now as I went up the steps to the mayor’s office, I remarked to my German counterpart that the village square was very pretty. ‘Oh you know,’ he replied, ‘when you see these things every day you don’t notice them anymore.’ Well, I would advise you, when you step outside, to open your eyes wide, pause a moment and look around you, as we did. You will realise, as we did, that your village square is very fine indeed.

So, Mr Mayor, for all this, for your kindness, and for the warmth of your welcome, we all say a big thank you. »

Come Sunday, the villagers of Carlsdorf and the visiting Queyrassins join together in the Protestant church with the local minister. It’s a unifying moment for those who believe, a moment of meditation for those who do not, a time of great emotion for everyone.

Above the entrance to the Carlsdorf church is this inscription: «French Protestants, exiled for their faith, built this church to the glory of God, and with the charitable assistance of Charles, Prince of Hesse-Kassel, who compassionately received them, preserving both their bodies and their faith, and who therefore deserves, here and elsewhere, ardent wishes for his prosperity and honor. Anno 1707. » 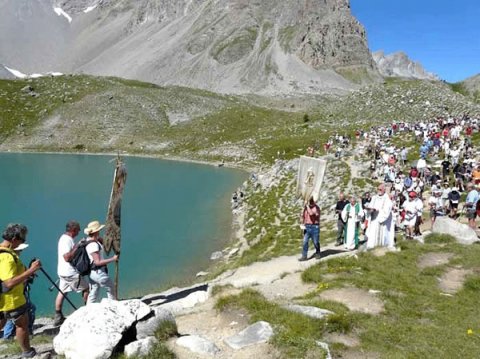 The procession to Lac Sainte-Anne at the foot of Font Sancte mountain is a tradition which goes back to the seventeenth century.

Legend has it that some young shepherds made a makeshift raft to cross the lake. They pushed off from the shore with the help of a gentle breeze. But just when they reached the middle of the lake, the wind dropped and they couldn’t get back. When evening came their parents were alarmed by their absence, and eventually traced them to Lac Sainte-Anne, where they were stuck on their frail raft. Advice, instructions, nothing worked, and in despair, the parents fell to their knees and prayed to St Anne, the patron saint of sailors; they solemnly promised that if their sons returned safe and sound, they would build a chapel in her honour. St Anne heard their prayers, and a light breeze sprang up which brought the young people back to land. 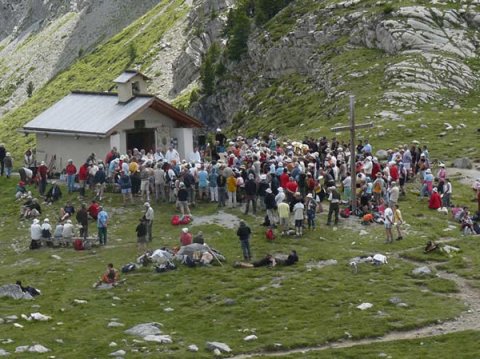 Apparently, ever since, a pilgrimage has been organised each year on the 26th of July. Two processions, under their village banners, depart simultaneously from Ceillac and Maurin in the valley of the Ubaye, passing over the Col Girardin. They meet at Lac Saint-Anne, where they say mass.

It is also said that after the processions, St Anne shows her satisfaction by sending rain at a particular time of the year when there has been a drought.

In fact it was already a tradition to go in procession to Lac Doux (Ladoux, or La Dous) in time of drought to pray for rain. On these occasions games were organised, such as races for young men and women on steep slopes. 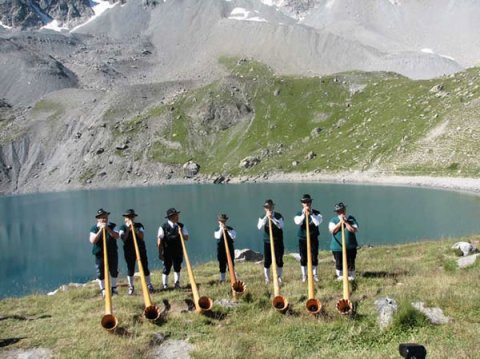 There was a St Anne’s chapel in Ceillac as early as 1743. The archives from that year refer to restoration works on the building, and the first recorded procession to pray for rain dates from 1699. So the chapel goes back to the seventeenth century or even earlier.

Repair works to the floor, the walls and the outer rendering were carried out in 1909. Then in the winter of 1918-1919 an avalanche wrecked the building, but it was rebuilt in 1920.