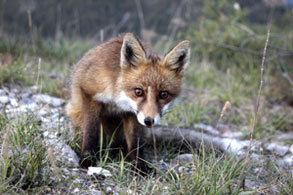 Voles, shrews and mice find shelter in winter by tunnelling under the snow. There are also beautiful stoats (which change their coats to winter white), neat squirrels, foxes, hares (which may also change their colour) and badgers. 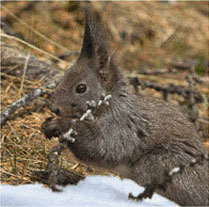 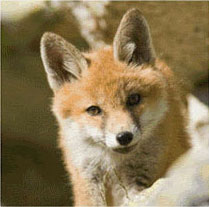 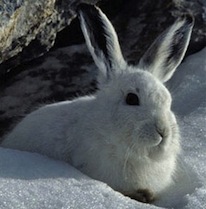 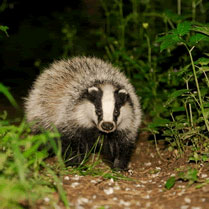 Badgers are mainly nocturnal, but will come out at dusk if undisturbed. Between May and August they venture very cautiously from their setts towards nightfall.

It’s not unusual to see them crossing roads at night. 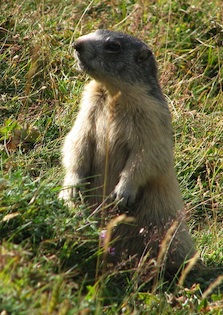 In summer it’s easy to catch sight of marmots. At the approach of danger, or of any walker, they utter a sharp whistle, which will vary in tone depending on whether the newcomer is a predator or just an intruder on their territory.

Marmots live in family groups of about fifteen. They dig networks of burrows and chambers under mountain pastures, and emerge only to feed. They sit on the raised edges of their burrows and on other mounds in order to spy out possible predators – mainly foxes and birds of prey. When the lookout marmot sees one, his warning cry alerts the other members of the group who immediately dive back into the warren of burrows.

Marmots hibernate for nearly six months, and spend the best part of the summer – until the beginning of October – building up reserves of fat. During this time they can double their body-weight and reach up to 8 kilos.

Large fauna, the ‘Great Fauna’ of the Hautes-Alpes, are well-represented in the Queyras.

The most visible and best-known are without doubt mountain sheep, chamois and ibex, but for some time now there have been roe and red deer.


Chamois and mountainsheep co-exist easily in the same territory, but ibex prefer higher altitudes and solitude. Fortunately, for some years now, ibex have been returning to the slopes of the Queyras, having been previously driven out by organised hunting in search of the supposed medicinal qualities of their body-parts. It is now a protected animal. 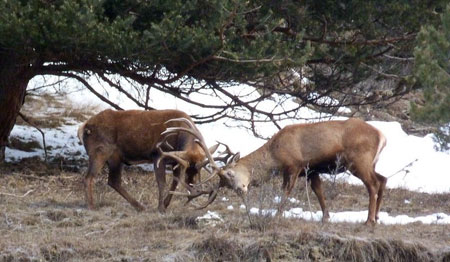 Red deer also disappeared from the Queyras but they returned about fifteen years ago and are now firmly established. It’s quite common to see stags and hinds around Escoyères near Arvieux.

At the time of the rut stags fight, sometimes to the death of one of them. 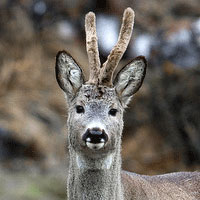 As long as twenty years ago there may have been no roe deer in the valleys of the Hautes-Alpes, but they are now well-established and on the increase.

Like red deer, with which they are often confused, roe deer have antlers which they lose in autumn. In winter they grow a long, stiff grey coat, in contrast to their spring colours of a reddish-orange; these changes take place twice a year. Towards nightfall it’s common to hear them roaring.. 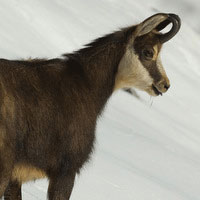 Chamois live for 15 to 20 years. They inhabit the rocky areas of the mountains, moving from 800 to 3000 metres up according to the seasons. They are herbivorous and vary between 25 and 40 kilos in weight, though animals of 60 kilos have been known. Their coat changes in colour from the dark brown of winter to summer’s light brown. They mate in November/December and the calves are born in May/June. A female may give birth to up to two calves, after a pregnancy of 165-175 days. 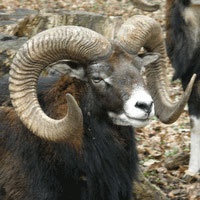 Mountain sheep are close relatives of our domestic sheep, and the male is very different from the female. Their preferred habitat is the lower to middle slopes of the mountains, especially south-facing ones. In winter they frequent the sunny slopes where the snow thaws quickly and at these times they come closer to human settlements.They can often be seen around Arvieux in winter and spring. As a species which has been imported by from Corsica by hunters, they get into difficulties in snow and are an easy prey for wolves. 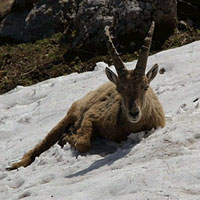 Ibex are very well adapted to the mountain terrain, moving agilely over ledges and steep slopes. The males and females live apart for much of the year, coming together in the breeding-season. Then the males engage in violent and spectacular fights over the females. In general, however, they are tranquil creatures and you may get quite close to them, and be impressed by their size – they can weigh up to 100 kilos.

bex may commonly be seen on Col Agnel in the Ristolas area.. 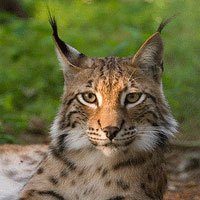 This magnificent animal has long suffered from an undeserved bad reputation. Lynx are solitary and nocturnal predators that are active from sunset to sunrise, but rarely seen. However, they have recently been spotted in the Queyras.

They have been a protected animal in France since 1979.First establishing themselves in the northern Alps, from Haute-Savoie to the borders of the Isère and Drome, lynx have extended their territory towards the south to meet that of wolves in the Hautes-Alpes. Today they are firmly settled in the north and they are reproducing there. 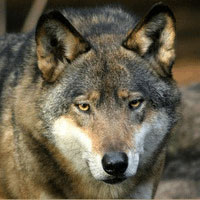 Throughout history no animal has been as much misunderstood, feared and persecuted as the wolf. Totally wiped out by humans at the end of the 1930s, they began to reappear in the Parc du Mercantour in 1992. In the Hautes-Alpes and in the Queyras in particular, wolves have come back through neighbouring Italy. There would appear to be two packs at present in the area, each with between 5 and 7 members, moving back and forth between France and Italy. Nowadays herds of sheep are better protected by sheepdogs and enclosed at night. Sheep-farmers, therefore, have recently seen fewer attacks from wolves, and they receive compensation for losses, although that does not fully make up for the traumas undergone by the flocks or their shepherds. 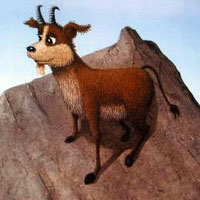 Dahuts or dahus are grey-brown animals whose main characteristic – apart from having four legs – is that two of their legs are shorter than the others: either the left and the right, or the front and the back. Those with a shorter front pair are known in the Hautes-Alpes only in the form of very rare fossils, having disappeared in the Early-Middle Permian Age. Being equipped only for climbing, they died of starvation once they had scaled the mountain peaks. Today there are two clearly-distinguishable types of dahu : the levogyre (left-turning) and dextrogyre (right-turning). They rarely cross-breed in the wild, with only a few acrobatic copulations ever having been seen.

At l'Arche des Cîmes in Ristolas you will find the Museum of the Queyras Regional Natural Park, with exhibits of all the animals of in the Hautes-Alpes. 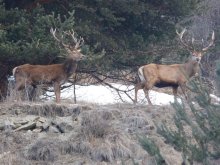