Twenty mountain passes, twenty outings for you on your holidays in the Queyras 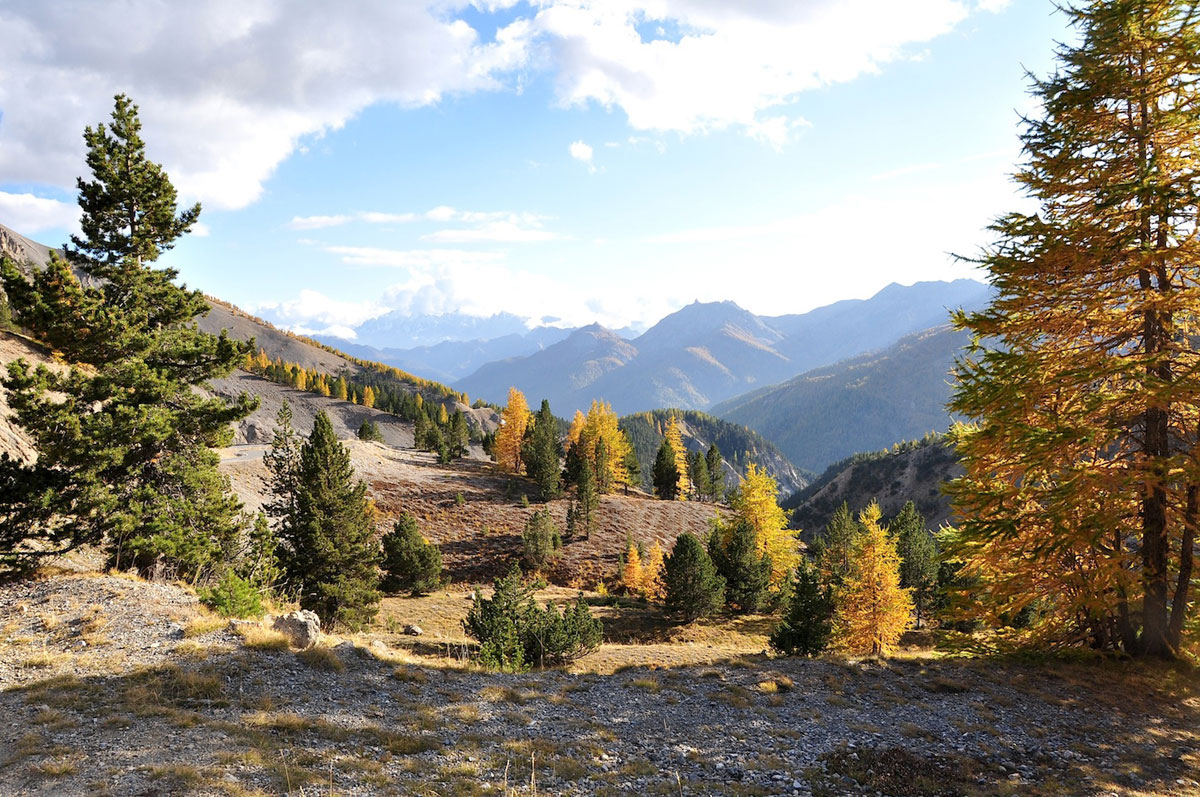 A col, a low point between two mountains, is always a special place. It’s here that you get the winds that are normally blocked by the surrounding mountains; it’s here that the rain and snow first fall. If the slopes are fairly gentle then the vegetation will be more luxurious and the flora in the pastures particularly rich.

A col is also a passage from one valley to another, so naturally, that is where you find routes of communication. There are many cols in the Queyras, and they are high. Two, (the Col d'Izoard (2361 m) and the Col Agnel (2744 m), which is also the highest in France after the Col d’Iseran(2744m), are the only paved roads that link the Queyras to the rest of the Hautes Alpes and to Italy.

A col is a marvellous place from which to see ‘what’s on the other side’. Whether a col overlooking the Briançon region, Italy and the Ubaye valley, or a col linking one Queyras valley to another – here are a few to choose from. A few ideas to help you pick a day’s hike and make you want to discover a new col.

Cols to the Briançon region 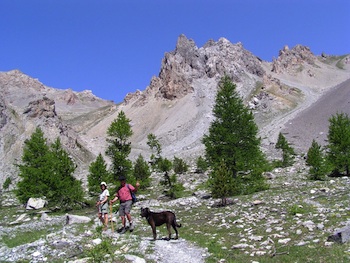 The Col du Lauzon is reached from the hamlet of Le Coin near Arvieux. After a climb through pretty scenery you arrive at the Lac du Lauzon (which may be dried-out at the end of the summer), then, up a stony path beyond the lake, the col itself. From there you can descend via the Lacs de Néal and Clapeyto or into the valley of the Durance in the Hautes-Alpes. 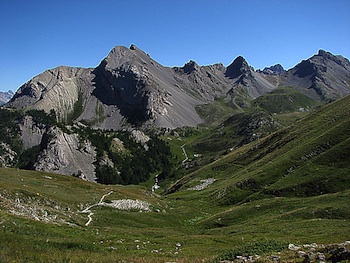 The Col des Ayes links the valley of Arvieux with the valley of the Durance in the Hautes-Alpes. It’s an easy route to Villar-Saint-Pancrace via the Chalets des Ayes. Before the days of the motor-car, people from Brunissard would go over the col to Briançon to do their shopping and come back, fully-laden, in the evening. Times have changed... 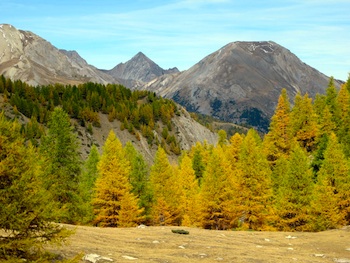 The Col des Ourdeis links the valley of Arvieux at Pra Premier with the valley of the Laus in the Briançon region (Hautes-Alpes), above the Chalets d’Izoard. Higher and narrower than the Col d'Izoard, this col is only to be attempted by experienced hikers, because the scree-slope on the Queyras side is long and steep. 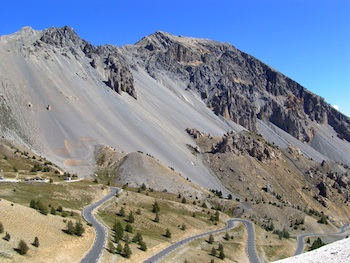 The Col d’Izoard, between Clot la Cîme and Côte-Belle, 's a cyclistsfavourite. It links the Queyras with the Briançon region of the Hautes-Alpes. Very busy in summer, it is closed from November to May. In winter its southern approaches from Arvieux are transformed into a cross-country ski circuit.

The Tour de France last came over the Col d’Izoard from Briançon on Saturday 19 July 2014. 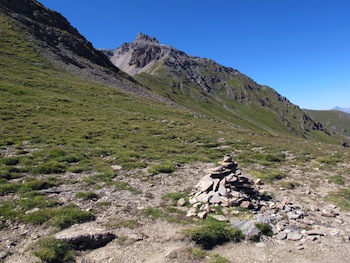 The Col de Péas at the foot of the Pic de Rochebrune links the valley of Souliers (Château-Ville-Vieille) in the Queyras with the valley of Cervières in the Briançon region (Hautes-Alpes). In 1692 General Catinat led his troops down from this col to liberate Fort Queyras assiégé par un détachement du Duc de Savoie. , which was under siege from a detachment of the Duke of Savoy. Near the col are the remains of an asbestos mine - worth a visit. 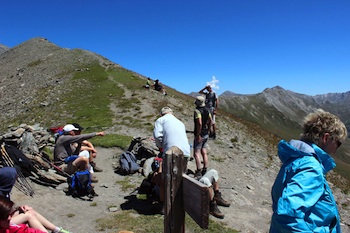 The Col des Thures is one of the passes used by the fleeing Protestants of Abriès who, rather than give up their faith after the repeal of the Edict of Nantes (1685), chose to go into exile. One such Protestant, safe in  Wurmberg in Germany, had the inscription ‘Col des Thures’ engraved over his fireplace in grateful memory. 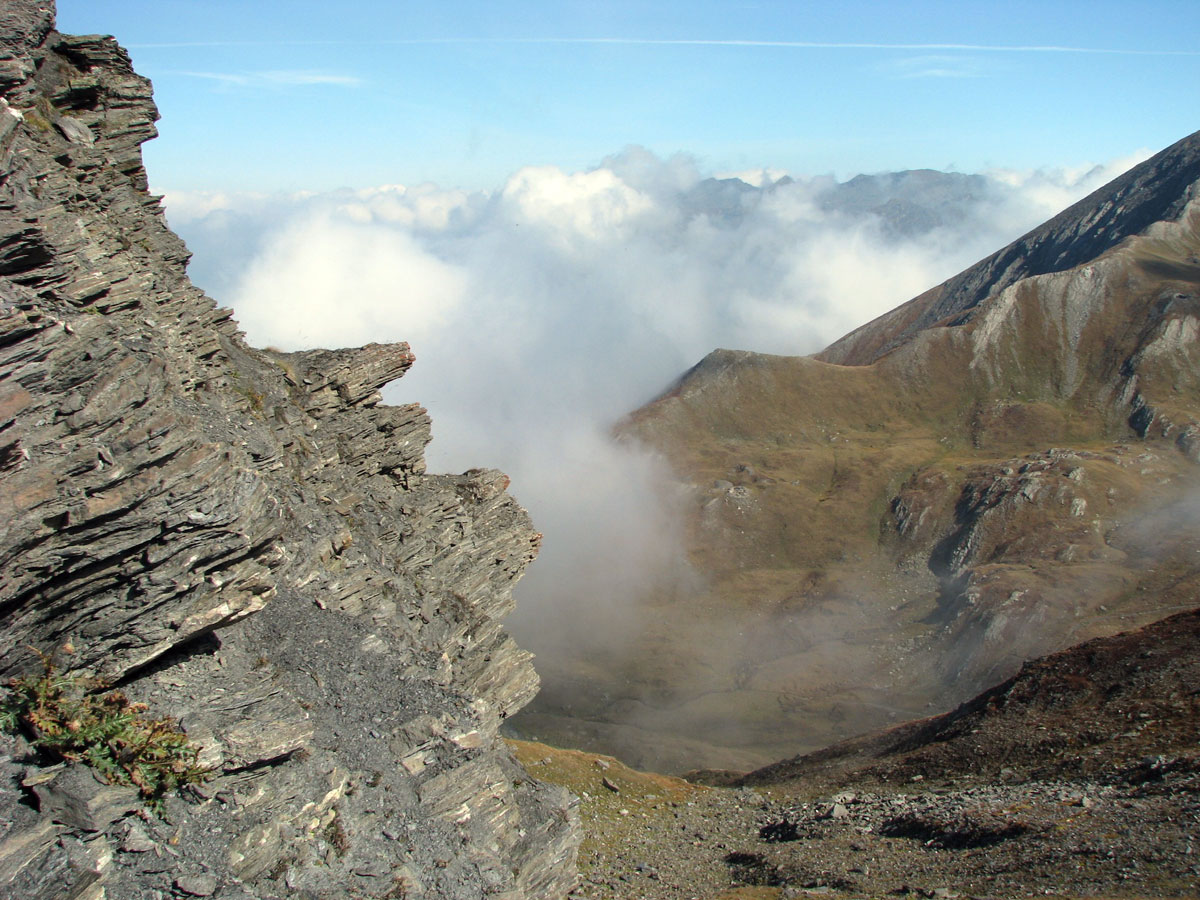 The Protestants of Molines, also fleeing France after the repeal of the Edict of Nantes by Louis XIV in 1685, went into exile over the Col Saint-Martin. The col is reached from the Roux d'Abriès (1735m) by taking the valley which goes east from Montette.. 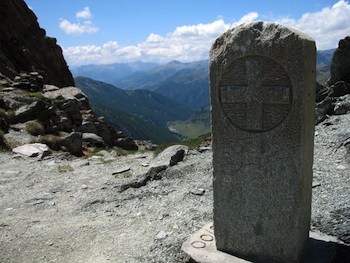 The rock at the Col du Bouchet is glossy schist which can be seen on its southern slope. Towards the Bric Bouchet the schist is overlaid with older limestone which would normally be found at a lower level. Tectonic forces have moved both schist and limestone so that the normal geological layering is reversed.

Malaure means ‘bad wind’. Like its neighbours the Col du Bouchet and the Col de Valpreyvere, is often enveloped in ‘nebbia’ (fog in italian), clouds which come up from the valley of the Po and fade at the border with Italy. Some historians think that Hannibal in his crossing of the Alps would have used this col in preference to the higher Col de la Traversette above Ristolas. 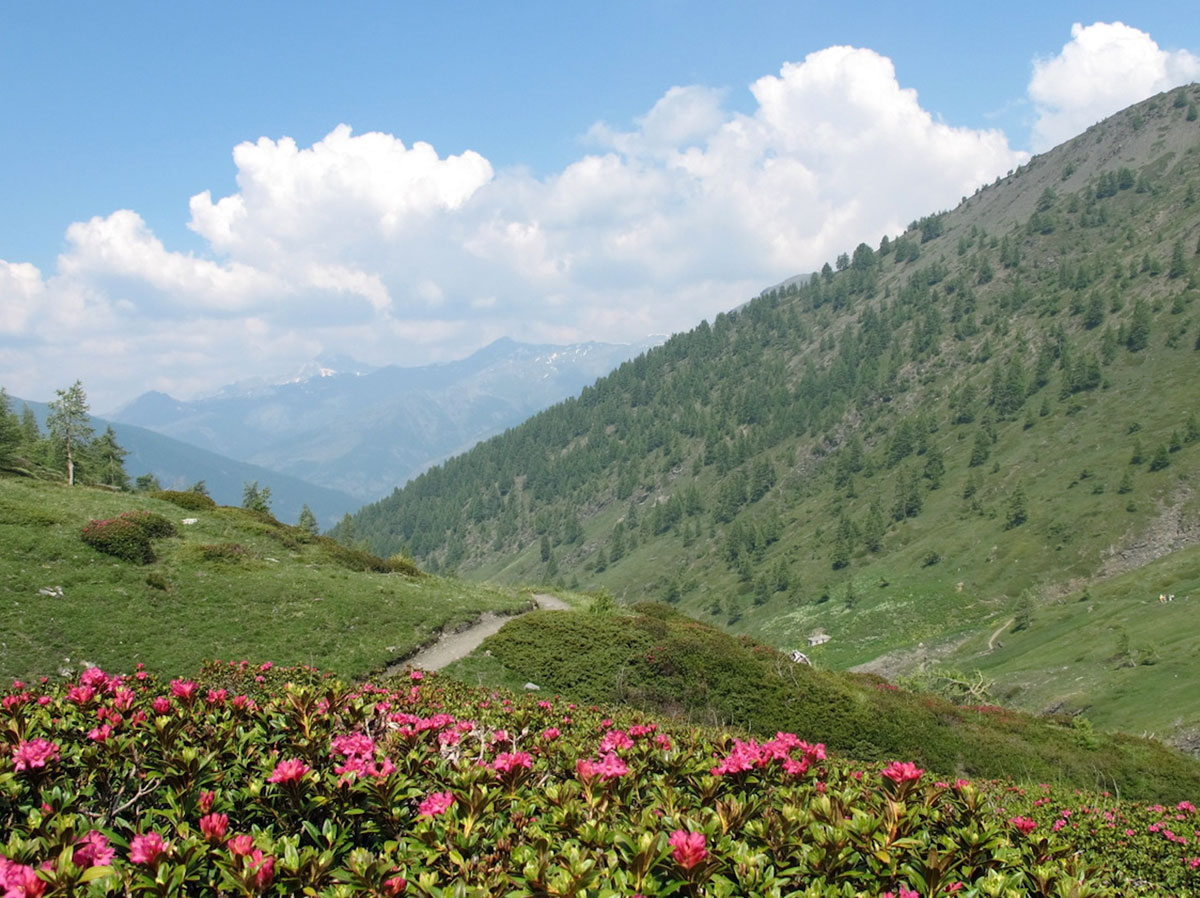 Col Lacroix links the valley of the Guil at the Echalp de Ristolas with the Val Pellice in Italy. The sides of the valley leading up to the pass are covered in rhododendrons. Col Lacroix, relatively low, has always been a commercial route between the region and the Protestant valleys of Piedmont. But soldiers, cattle-rustlers, and partisan have passed this way as well. Still visible are the remains of the Refuge Napoléon, built at the end of the 19th century and destroyed during the Second World War.

This col is famous for the tunnel dug in the 15th century, under Louis XI, at 2900m, to secure the salt-road between the Etang de Berre and Italy. The tunnel made it possible to avoid the lands of the Count of Savoy who controlled the Mont Cenis col.

This is another col which has been suggested as the Alpine crossing-point for Hannibal and his elephants. 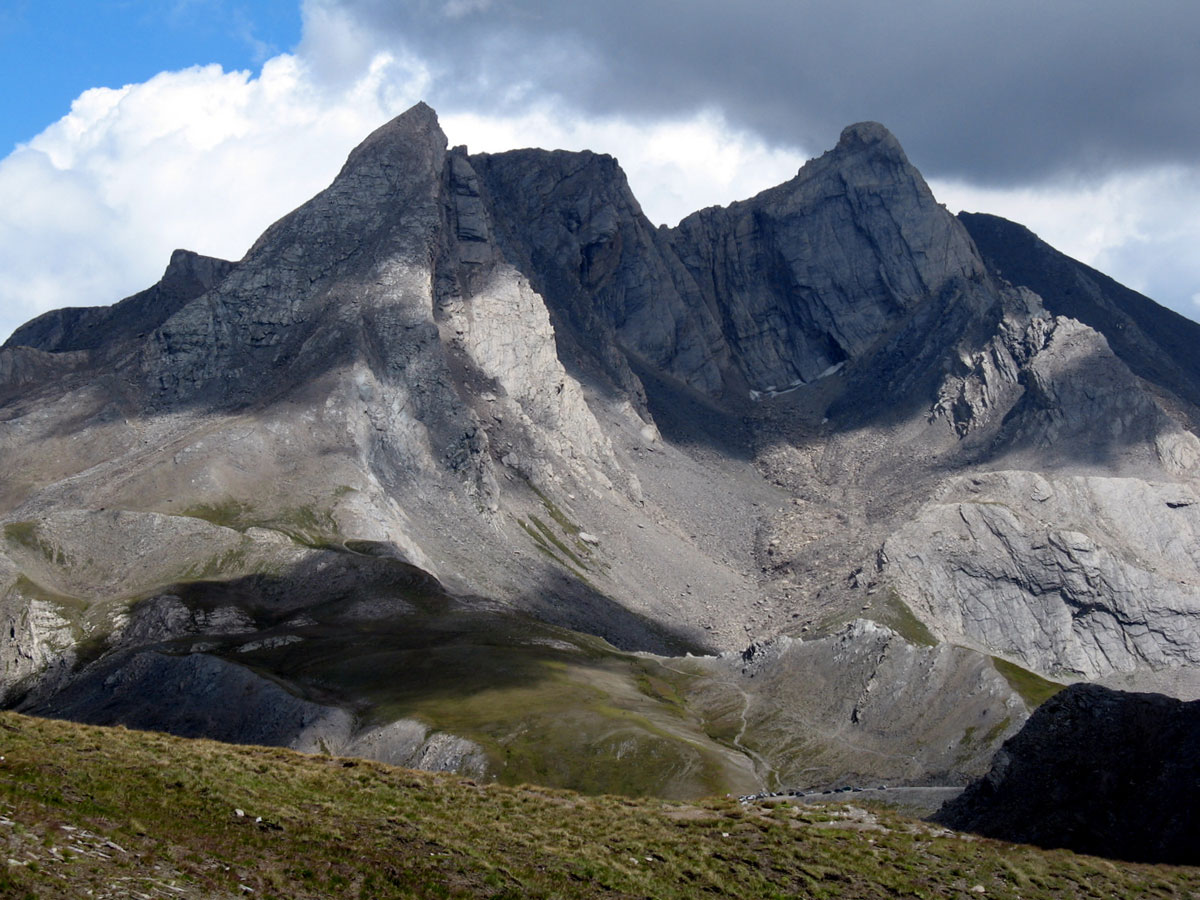 Col Agnel links the Queyras to Val Varaita in Italy. It is flanked by the Pain de Sucre (3208m) and the Punta dell’Alp (3033m). It is the second highest French road col after the Col d’Iseran, having been built in 1970. The Refuge Napoléon, built at the end of the 19th century to shelter travellers, has gone now, swept away by an avalanche. The Tour de France came over the Col Agnel from Italy for the first time in 2008. 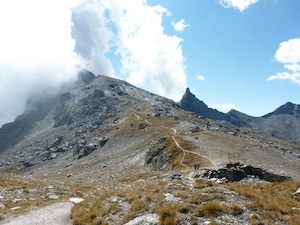 Also called the Col de la Cavale, this pass links the Vallée de l'Aigue Blanche to Val Varaita in Italy. There is a good view over the Italian side of the mountains on days which are clear of nebbia, those clouds which come up from the valley of the Po. From this col you can climb up to the summit of the Pic de Caramantran (3025m) 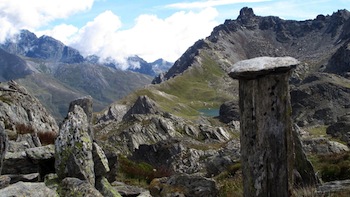 The Col de Longet is the last col in the south between the Queyras and Italy.

The Col de la Noire, between Saint-Véran (Queyras) and the Ubaye (Alpes-de-Hautes-Provence), is the easternmost in the region. Over this pass, coming from the direction of Saint-Véran, you reach the Lac de la Noire. 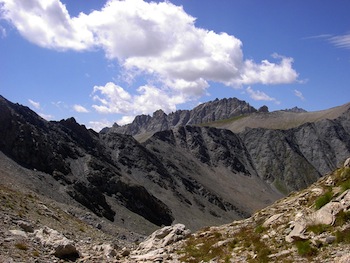 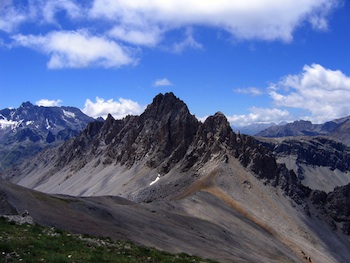 Col Albert, one of the numerous passes linking the Queyras and the Ubaye in the Alpes-de-Hautes-Provence, lies between the Tête du Rissace (or le Longet) (2969m) and the Rocher de l'Essassa. It is reached by climbing the Vallon d’Albert from Ceillac. 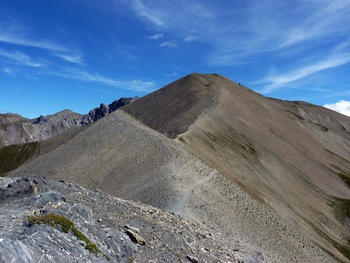 Of all the cols linking the Queyras and the Ubaye in the Alpes-de-Hautes-Provence, Col Girardin is the lowest and so the easiest to cross. The GR5 waymarked trail coming from Mercantour and going towards Briançon follows this route. The view over the Ubaye from this col or from the nearby Tête Girardin is magnificent. 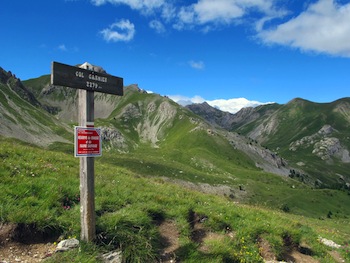 Col Garnier links the Queyras to the region of Guillestre in the Hautes-Alpes. As it lies at a fairly low level and is easily reached from Arvieux, it was much used at a time when the route via La Combe could be swept away by flash-floods or rockfalls. 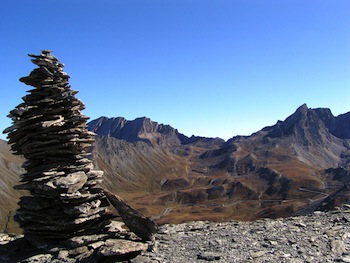 If you are walking from Ceillac to Saint-Véran the easiest thing to do is to take the GR58 waymarked trail which goes over the Col des Estronques. It’s a fine walk which can be extended by going a few miles more over the Col de Bramousse and the Col Fromage. 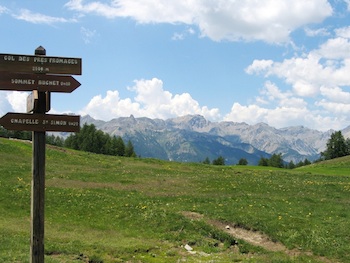 This col between Molines and Ceillac has both rich mountain pastures and a superb panorama over the whole of the Queyras. Along the same route is the Sommet Bûcher (2254m) which has an orientation table.. 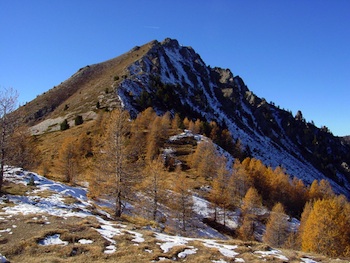 Before the road along the river Guil was built, communications between the Queyras and Guillestre, and the Hautes-Alpes beyond, went through Molines over the Col Fromage and Ceillac. The Duke of Savoy’s soldiers, who had been besieging Fort Queyras, and were defeated by General Catinat’s men coming down from the Col de Péas escaped over the Col Fromage. From the col you can see the optical signalling post on the summit of the Crête des chambrettes. 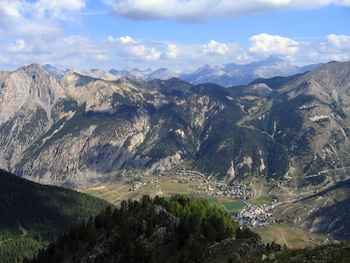 From Ceillac this is a steep climb up the Ravin de Lourette.

The Col de Bramousse is well-known to hikers on the GR58 (Tour du Queyras) who, coming from Ceillac, then have to cross the Guil before climbing to the Chalets de Furfande. 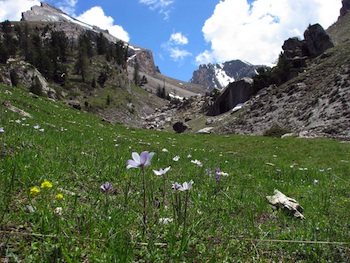 The Pas du Cure lies between the Pointe de la Saume and the crest of Font Sancte, and from Ceillac (1633m) you first have to go to the Lac Miroir. From there strike off west through a pretty larch forest and then across an Alpine meadow. So far, so good. But things get rough at the end – steep slopes, rock-falls, unstable scree. Still, the landscape at the pass is worth all the effort. You can go back down along the west bank of the Cristillan until you hit the road to Ceillac. 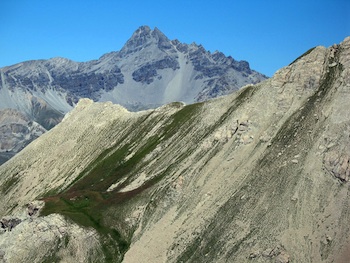 From Arvieux, in a 4x4, you can get to the Col de Furfande up the narrow valley of the same name. Better still, on foot, from Le Queyron or Les Escoyères along the GR58 waymarked trail. From the pass you have a fine view of the summer chalets, the Pic du Gazon and the valley of the Durance in the Hautes-Alpes. 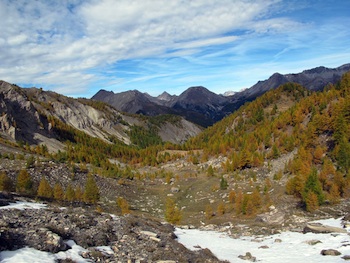 At the top of the narrow valley of Fontouse above Arvieux, you can see traces of the glacier which carved it out. Reaching the col means climbing up a series of “terraces” on the mountainside. These are ideal for children’s games. On the lowest of them is the Cabane de Fontouse, below which the stream tumbles down a steep-sided ravine; the path follows the stream. Beautiful scenery! 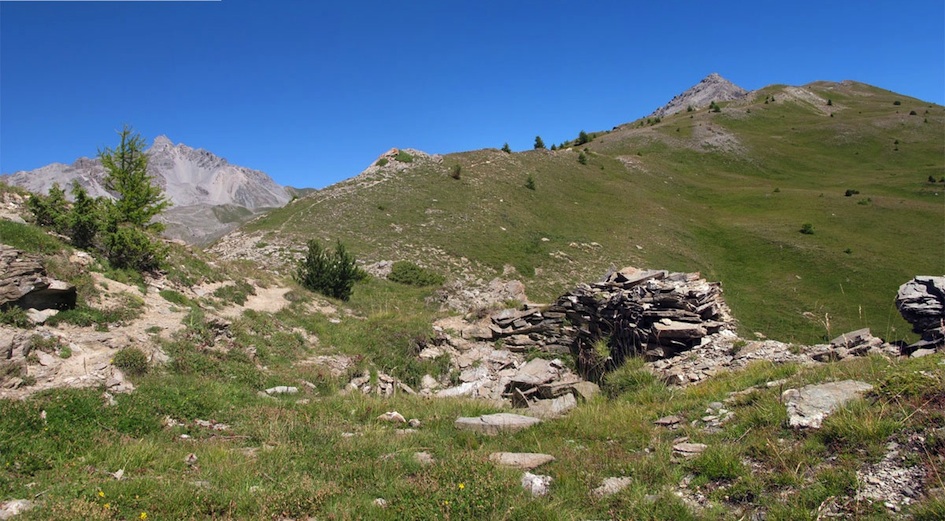 The Col de la Crèche, between the Vallon de Péas and the valley of the Guil at Château-Ville-Vieille, is a charming place for a family picnic. Hardy souls can climb up to the Pic de l'Agrenier (2793 m). From Meyriès (1700m) you can follow the track which leads to the Bergerie (sheepfold) de Péas and go on from there, or follow the GR58 towards Aiguilles, turning at the shrine to climb through the forest. 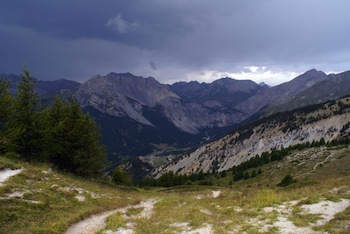 This col on the GR58 can be reached from the Clot la Plâtrière car-park at the foot of the Casse Déserte, on the road to the Col d'Izoard. The path goes across the mountainside and gives lovely views over the Crête des Oules and the valley of Arvieux. On the Souliers side (Château-Ville-Vieille) the climb through the forest is steeper. 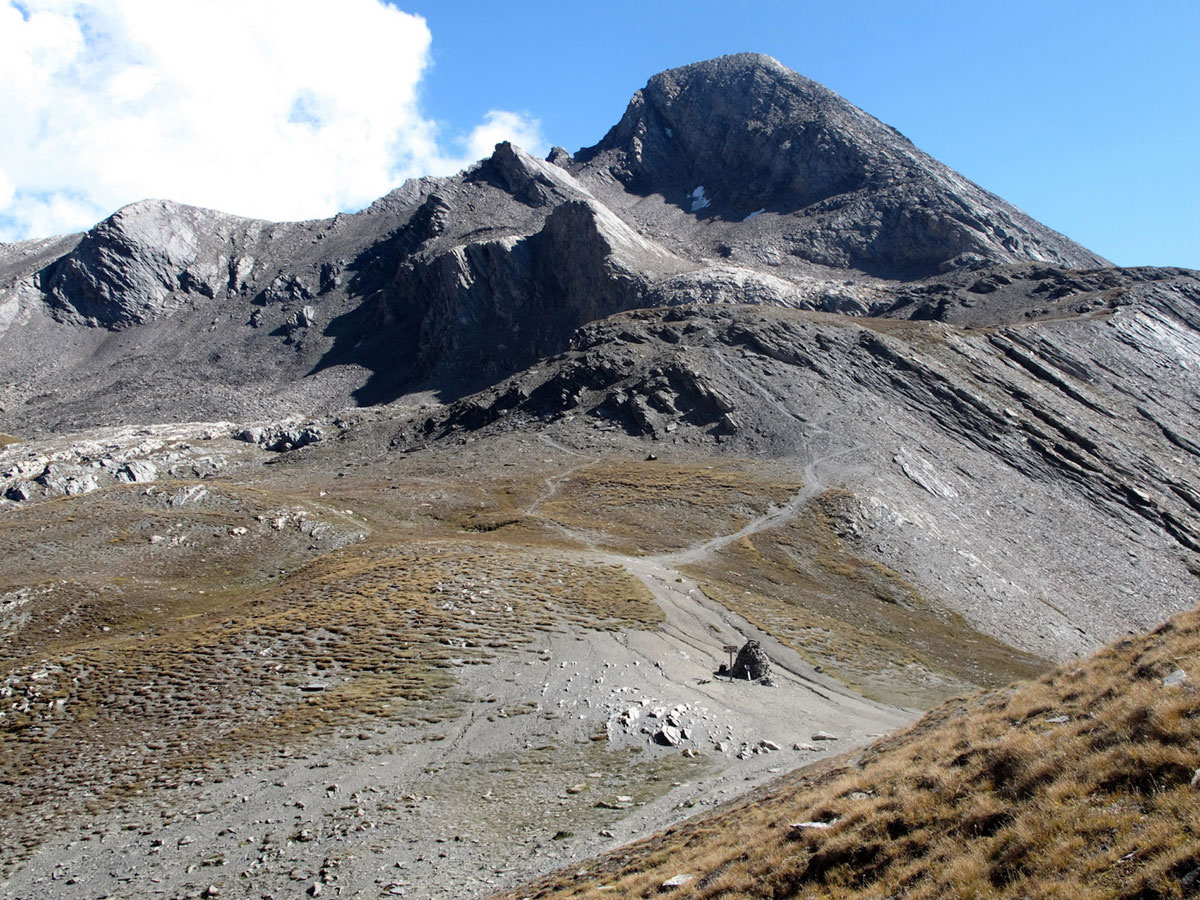 The Col Vieux makes it possible to go from the Col Agnel, in the valley of the Aigue above Molines, to the Vallon de Bouchouse which runs down to Ristolas. Along the way are the Lacs de l'Eychassier, Lac Foréant and Egorgéou, and Lac d'Asti. From the col there is a magnificent view of the Pain de Sucre, the Crête de la Taillante and numerous other peaks. 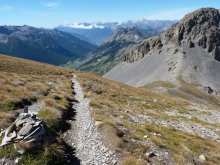