The mountainous environment of the Hautes-Alpes, of which the Queyras is part, makes for difficult conditions in which animals, particularly birds, must survive cold, snow and shortage of food. Certain animals protect themselves from the cold by means of thick fur or plumage; others such as marmots hibernate underground, thus solving the problems of feeding and keeping warm at the same time. Mountain hares and ptarmigan camouflage themselves by changing colour with the seasons, and so attempt to escape predators such as foxes and birds of prey. But if this helps to conceal them against the snow, a dark pelt or plumage retains heat more efficiently. In winter big herbivores like mountain sheep, ibex and chamois come down into the woods to seek food and shelter. Each of these creatures adopts the best strategy for survival in its natural environment.

But they all must save as much of their energy as possible, which means moving as little as possible. Human beings must avoid disturbing wildlife and destroying vegetation as a result of winter sports – especially snow-shoeing, Nordic skiing and cross-country skiing. Black grouse in particular are easily put under stress. Disturbing their winter habitat more than three times can cause them to die of exhaustion, because their slow, heavy flight is energy-sapping and their winter food is particularly light in calories.

Birds of prey in the Queyras (Hautes-Alpes) 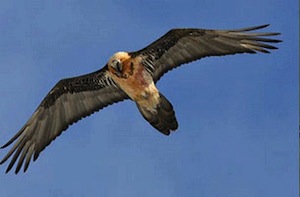 The bearded vulture, the largest vulture in Europe, is being reintroduced in the Hautes-Alpes. It can be seen in the Queyras, but is not apparently nesting yet. Golden eagles are slightly on the increase. Short-toed or snake eagles come in summer. These migratory birds, feed, as their name suggests, mainly on snakes.

Both they and kestrels hover while searching for prey (in French this is called the Flight of the Holy Spirit).

Recently a group of tawny or griffon vultures – birds that do not nest here – have been observed above Saint-Véran and Col Agnel un groupe de vautours fauves. Apparently they come down from the nearby Drôme region to feed on the carrion of sheep and other animals left lying in the mountains. 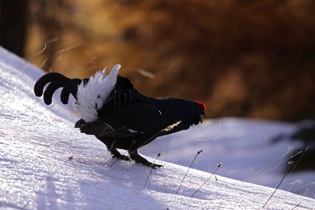 While out hiking you may hear the black grouse, calling.

This astonishing member of the gallinaceous family encounters the same problems of survival as the capercaillie, which is now extinct in the Hautes-Alpes. It is especially known for its mating dances, which take place between mid-April and mid-June, depending on the region and the severity of the winter. Nevertheless, being tree-dwelling, it adapts to the environment better than the capercaillie, particularly where there is woodland, sandy ground (for its dust-baths), and plentiful water for its great thirst. In the mountains, especially the Alps, this bird lives at altitudes between 1000 and 2700 metres in areas largely devoid of other game. It is very shy and fearful of humans; it seeks out quiet places.

In periods of severe cold, black grouse burrow horizontally into the snow to make a den where they can stay for several days. People snow-shoeing in the mountains or hunting for them (still permitted in the Hautes-Alpes but banned in nearby Drôme), have contributed to the disastrous decline in the numbers of black grouse in the Queyras. For example, the Grand Bois de Ségure on the track to Pic de Maloqueste and the Lac de Ségure is a favourite wintering spot of these birds. Skiers’ and walkers’ disturbance of their habitat can be fatal. Please avoid these sensitive areas.

Colonising the alpine levels between 1800 and 3000 metres, ptarmigan or snow partridge undergo several colour-changes during the year, mimicking nature perfectly. They become completely white in winter apart from the tail which is black all year round. 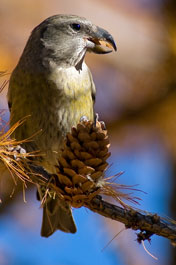 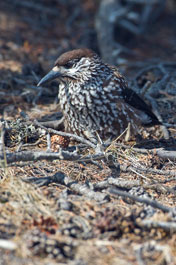 The woods of the Queyras are home to several varieties of tit (Long-Tailed, Blue, Coal, Great, Crested, Alpine), as well as passerines (chaffinches, nuthatches, crossbills, wrens, black and spotted woodpeckers), and the small nocturnal birds of prey already mentioned. 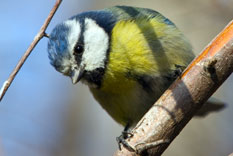 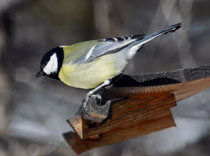 Certain birds have made their home in the high mountains. For example, whinchat and northern wheatear, redstart, water pipit, Alpine accentor, snow finch, rock partridge, Alpine chough, great raven – and of course birds of prey. Special mention should be made of the Alpine wall-creeper (tichodrome) which can be seen on large limestone cliffs. This bird is truly unique for the agile way it creeps along rocky faces and for its vaulting, butterfly-like flight.