The bell-tower of Brunissard, also known as the Prosecutor’s Tower 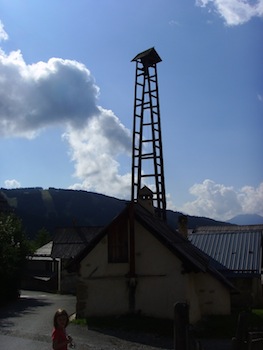 As you walk through the streets of Brunissard you will notice a strange construction made with larch logs, next to the Protestant chapel. People call it the bell-tower or the Prosecutor’s Tower.

Who was this prosecutor, and what was the tower for?In 1882 Monsieur Blanc, the primary-school teacher in Brunissard, wrote:


"There were four village prosecutors. For years they were appointed and approved by the Court of Grenoble and I have seen the documents in the Chest.(1) – that is probably where the name “prosecutor” comes from. These men were endowed with extensive police powers to punish the slightest offence against the community or property, and to impose fines. For example, they could fine anyone who took wood from the main local forests such as Sapeït, Clot Long and Bois Noir, which were considered almost sacred. If the fine was not paid immediately, the prosecutors could seize an item of the offender’s household goods, a cauldron, a cooking pot, etc. as payment. As time went on, these powers were weakened. Everything I write about happened not more than a hundred years ago. It was the abuse of power which led to the prosecutors being reduced in number from four to two. They took turns and usually started duty on the day when the allocation of water from the Pinua irrigation canal was agreed. ."

(1) The “chest”in question contained all the archives of the community. They were destroyed in the devastating fire which wiped out the village in 1882.


Over time, then, the role of prosecutor changed. Their number was reduced from four to two well before 1882. Their long term of office (“they were appointed indefinitely”) was reduced to a year, and their status was lowered. No longer officials of the Court of Grenoble, they were now simply village officials. Each family in the upper and lower parts of the village took turns to provide a magistrate. Their function became the organisation of communal decisions in the village- decisions about sharing the water, moving cattle to the upland pastures, communal bread-baking, working parties for the upkeep of roads and canals, and so on.

To call the villagers to a meeting, or to sound the alarm in the event of fire, one of the prosecutors would ring the bell in the tower, hence its name of the Prosecutor’s Tower. Each family would send a representative to the meeting and he would report on the decisions taken.

Owing to changes in society and technology this simple age-old tradition has all but disappeared, but it has not been forgotten and may yet come back. Even if today canals that are no longer used are not maintained, and there is no more communal baking of bread for the whole winter, there are still work parties to maintain the track up to the chalets at Clapeyto. Each year in spring, chalet-owners delegate a family member to do a day’s labour repairing the damage caused to the track by snow, ice or water.

The Prosecutor’s Tower Tower was last restored in 1998. In accordance with tradition, the carpenter who had done the work then stood on the roof to demonstrate the strength of his handiwork – and his own sense of balance. 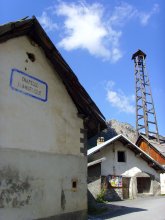