Mountain lakes in the Queyras

23 high-altitude lakes to visit in the Queyras 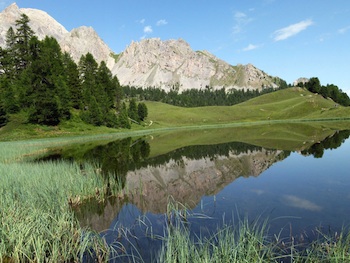 Le Queyras in the Hautes-Alpes has around thirty mountain lakes, situated at altitudes from 1854 metres to 2925 metres. The lower-lying ones are on the edge of forests or in the middle of mountain pastures; others by contrast, are well above the tree-line, in a rocky landscape brightened in summer by colourful flowers. All the lakes are frozen and snow-covered in winter. Whether you are on skis or snowshoes, you may well cross over them without realising that they’re there.

We’ll describe some of them here – though not as they are all year round. We hope that you’ll be tempted to ‘take in a lake’ and find your way to the one of your choice. 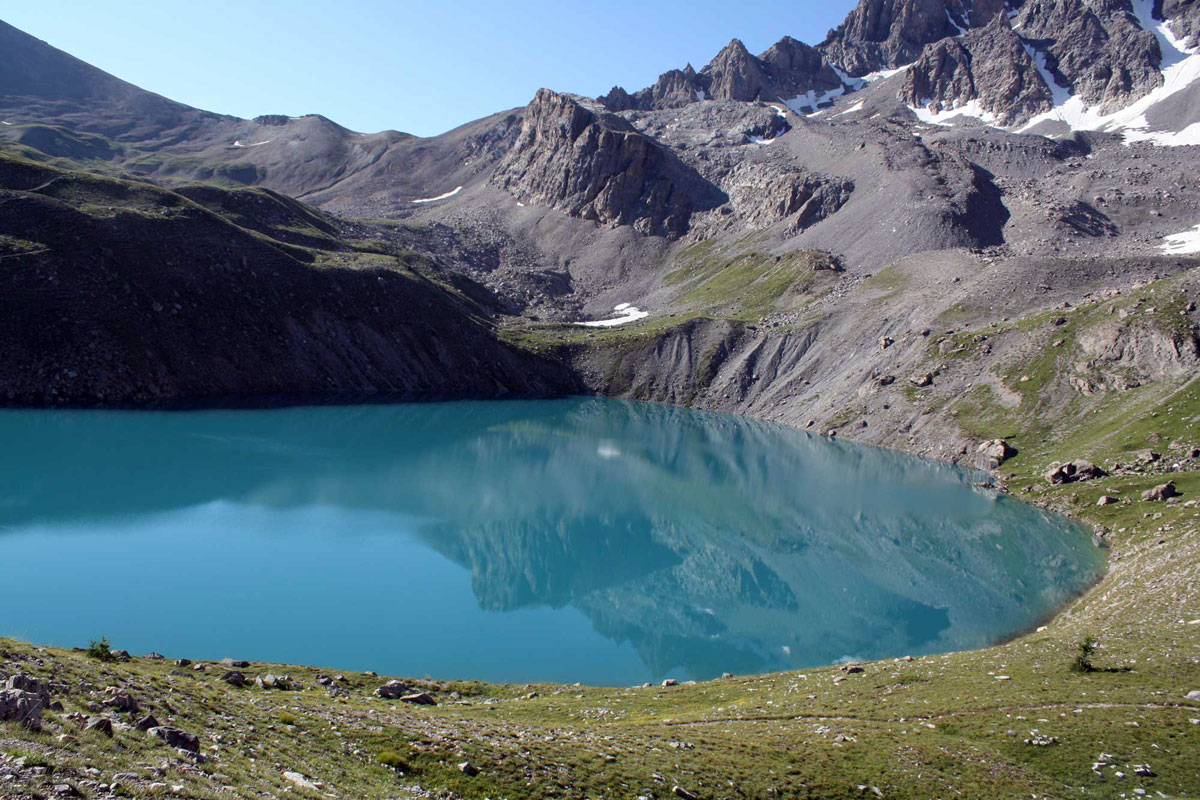 Lac Sainte-Anne lies on the GR5 waymarked trail, beneath the Col Girardin (2706m) and at the foot of Font Sancte (3385 m). Every year there is a procession here in honour of Saint Anne, who, the story goes, rescued some children who had become marooned in the lake on their makeshift raft.

Lac Miroir is also called ‘Lac des Prés Soubeyran’ (Lake of the High Pastures). Its name comes from the fact that the Font Sancte mountain is often beautifully reflected in its surface. Lac Miroir, like Lac Sainte-Anne, is on the GR5, but its shore shelves more gently. It’s an ideal spot for a picnic with the children on a walk from Ceillac. 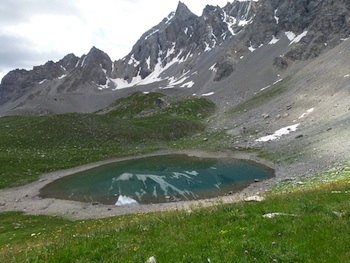 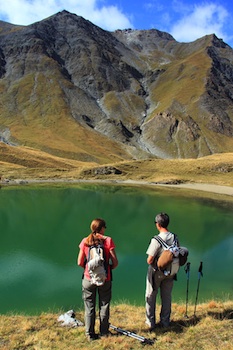 At the bottom of the valley of Cristillan, at the foot of the Col de Clausis, Lac de Clausis is another fine walk from Ceillac, with magnificent views over the Queyras mountains. 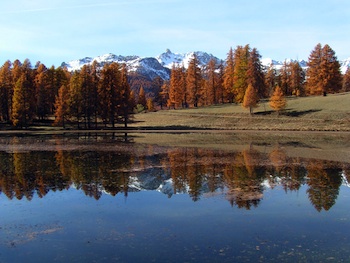 Larch-fringed Lac de Roue lies on the border between Arvieux and Château-Ville-Vieille, on the GR 5. Old folk used to call it ‘the Lake of the Quaking Mound’ owing to the island of vegetation that had formed in its centre. This floating island was moored to the lake-bed by long roots, and swung from one bank to another with the wind.. 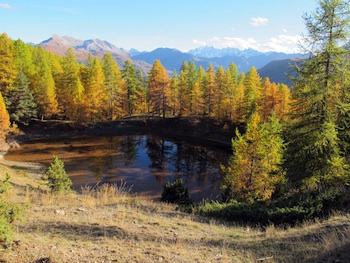 This is a forgotten little lake lying between La Chalp d’Arvieux and Lac de Roue, under Camp Catinat. Only mushroom-hunters are likely to come across it. ‘Laus’ in Queyras dialect actually means lake, so the name Lac du Laus is literally ‘lake of the lake’ 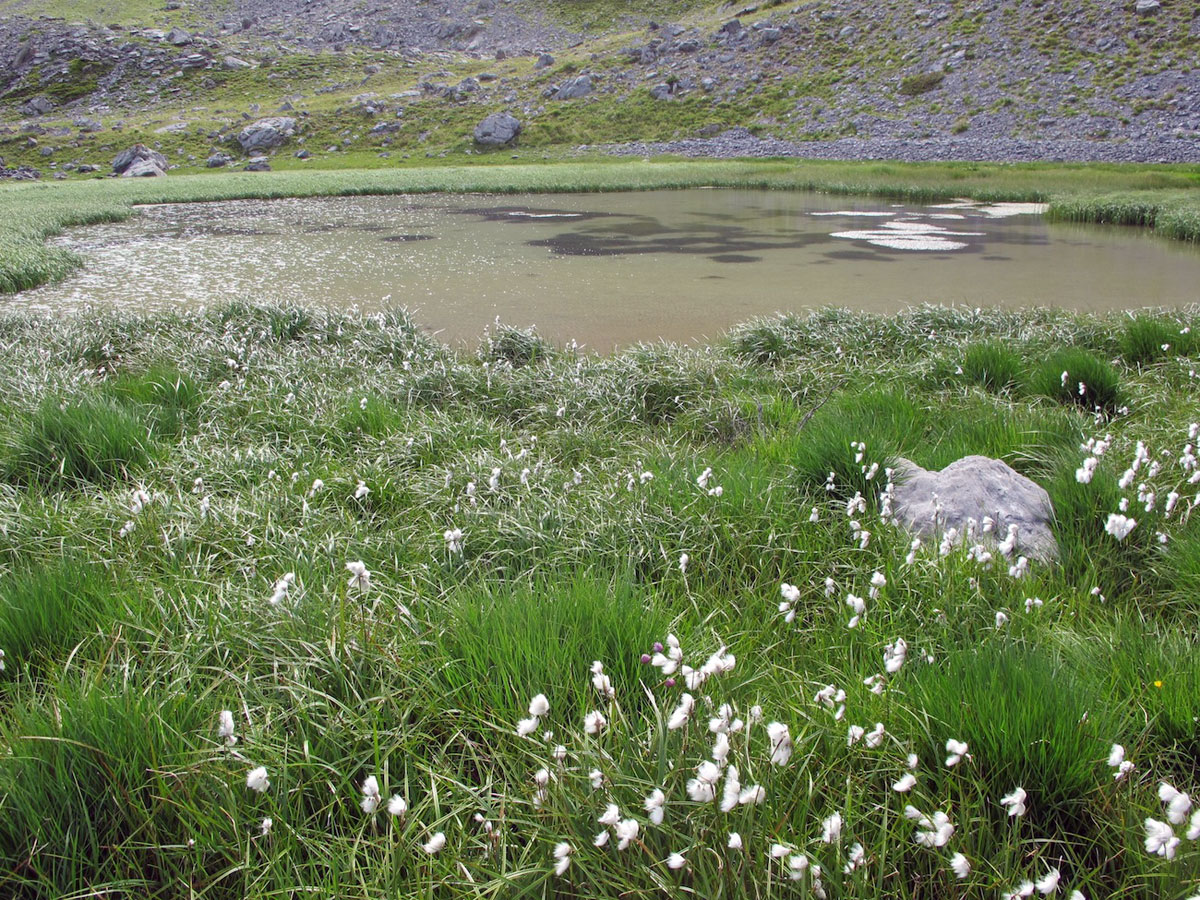 At the foot of  Col Garnier, , close to the Furfande chalets and in the middle of a damp meadow, Lac de la Valette is ringed with flowering  cottonsedge. 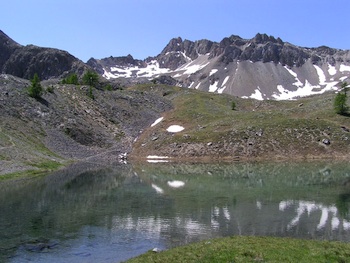 Lac du Lauzon is reached by climbing the Combe Bonne valley from Le Coin d’Arvieux, or via the Brunissard-Clapeyto, Col Néa-Col-Néal-Le Coin circuit. Magnificent in spring, Lac du Lauzon may be dried up by the end of the summer. ‘Lauzon’ is another dialect word for lake. 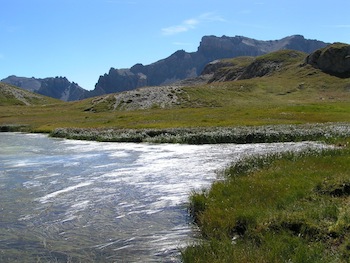 Coming up from Brunissard (at the top of the Arvieux valley) via the Clapeyto chalets, you reach Col Néal with its numerous lakes in the ‘sagnes’ (marshes or peat-bogs). There is Lac du Cogour (2488m), Lac Marion, Lac de la Favière and other unnamed lakes. Lac Néal itself lies at the top of the little valley that goes down the other side to Roche de Rame. 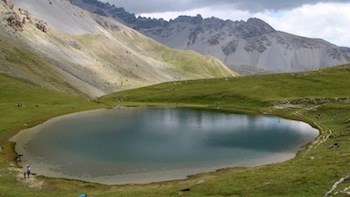 You reach Lac de Souliers at the foot of the Côte Belle ridge. This is a good walk for children. Coming from Arvieux, leave your car at Col de la Platrière (Casse Déserte) and from there follow the GR 58 (Tour du Queyras) to the fork for Col Tronchet, where you take the branch to the Lac de Souliers.

According to legend, careless bathers are sucked down by the supposedly-bottomless waters of this lake, which never gives up their bodies. 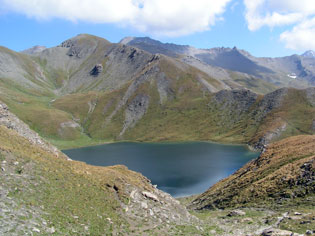 The three Malrif lakes are at altitudes between 2583m and 2805m. Lac de Grand Laus lies on the GR 58, tour du Queyras.  It can be seen from the col, coming from the direction of Cervières. You can also reach it from the Abriès direction up a steep climb. Lac Mezan is smaller and is quite charming – a secluded nest of greenery dotted with flowering cottonsedge. The highest lake, Petit Laus, lies in much rockier terrain. 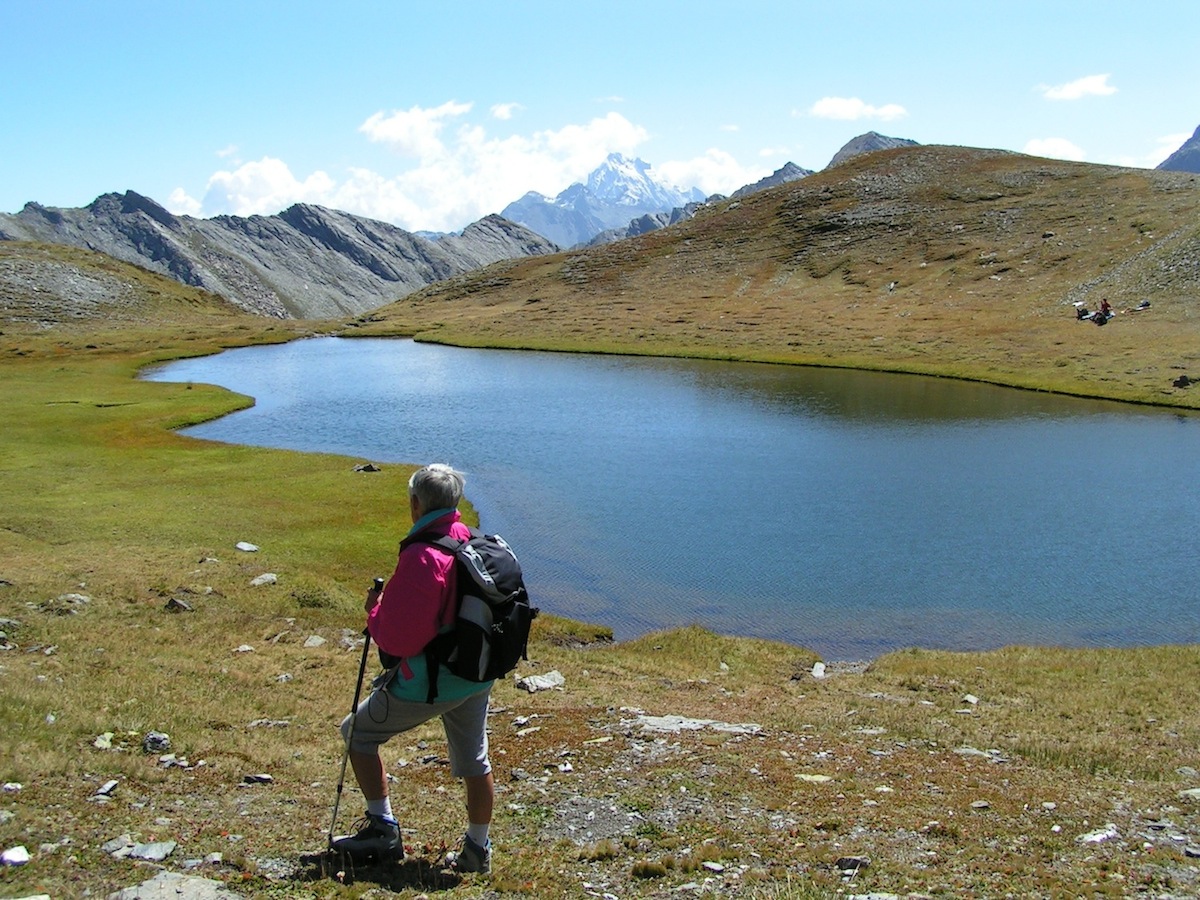 Deep in the little valley of Bouchet, beyond the Abriès hamlets of Le Roux and Valpreveyre, is the pretty Lac de Chalantiès, a good walk in itself or a stop-off point on the way to Col St-Martin. 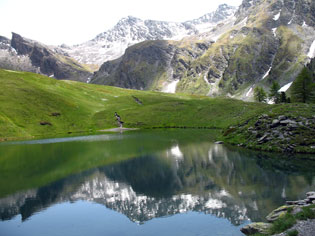 The Lacs de Ségure are only 50 metres apart. They are reached from Ristolas (1590m) up the little valley of Ségure.

Wedged between 3000-metre summits above Ristolas, Lac de Lestio, at the foot of  Mont Viso, feels like a lake at the end of the world. Close by in the screes is the source of the river Guil, which runs into the lake. 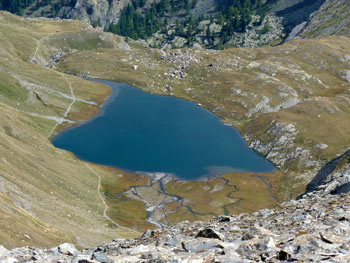 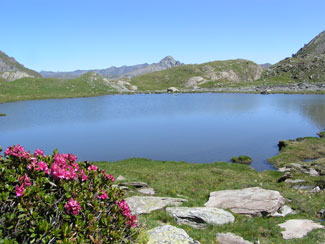 Lac Baricle is a small lake near Ristolas which overlooks lac Egorgeou – much smaller but equally charming. 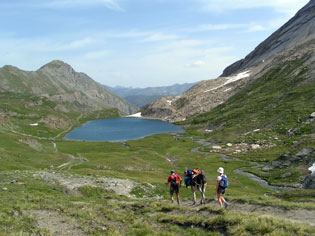 Lac Foréant, like Lac Egorgéou, is on the GR 58, Tour du Queyras which passes through Saint-Véran. It is overlooked by the majestic Ristolas mountain of the Crête de la Taillante, rising to 3197 metres. 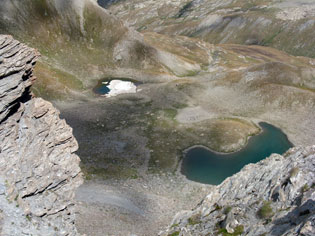 The three Lacs de l’Eychassier are situated beneath pic Foréant (3081 m), at the Col d’Eychassier, above lac Foréant. To reach them you must leave your car at the Refuge Agnel (2620m) and go over col Vieux (2890 m). 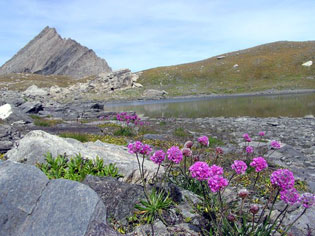 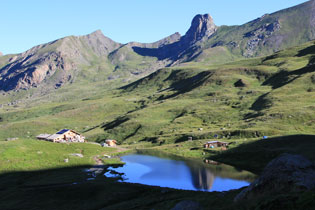 Aigue Blanche, the river which flows past Saint-Véran, rises in Lac de la Blanche. The Refuge de la Blanche is nearby. Just as the river and the lake are “white” (blanche) so are the flowering cottonsledges on the banks of the lake, which is overlooked by the Tête des Toilies (3,175m) and Rocca Bianca (3,059m).. 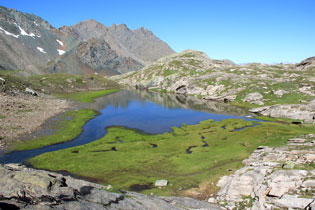 Dominated by the Pic de Caramantran (3025 m), this is another delightful cottonsledges-lined lake

Below the black-basalt mass of the Tête des Toilies (3175 m), , Lac Blanchet Supérieur lies in a rocky setting near Saint-Véran. 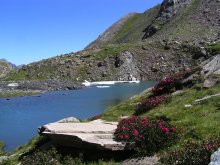