The Mountains of the Queyras 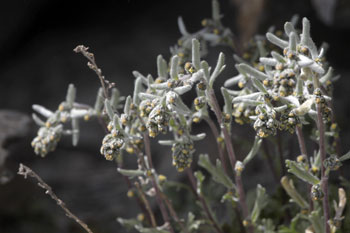 The genepi, a plant of the high mountains

The genepi is an aromatic plant of the artemisia (wormwood) genus which can be picked in July above altitudes of 2,300 metres. It is used in herbal teas to treat coughs and colds.

The Queyras in the Hautes-Alpes contains 29 mountain peaks over 3000 metres – not to mention Monte Viso just over the border in Italy. This should interest any experienced mountaineer keen to add to his record. But there are also plenty of peaks which a hiker with a good pair of boots can tackle.

We don’t claim to deal here with every mountain. The aim is just to tempt lovers of mountain sports to have a go at one climb or another, in summer or winter. Young and old will appreciate the pleasures of vigorous exercise among impressive mountain landscapes. 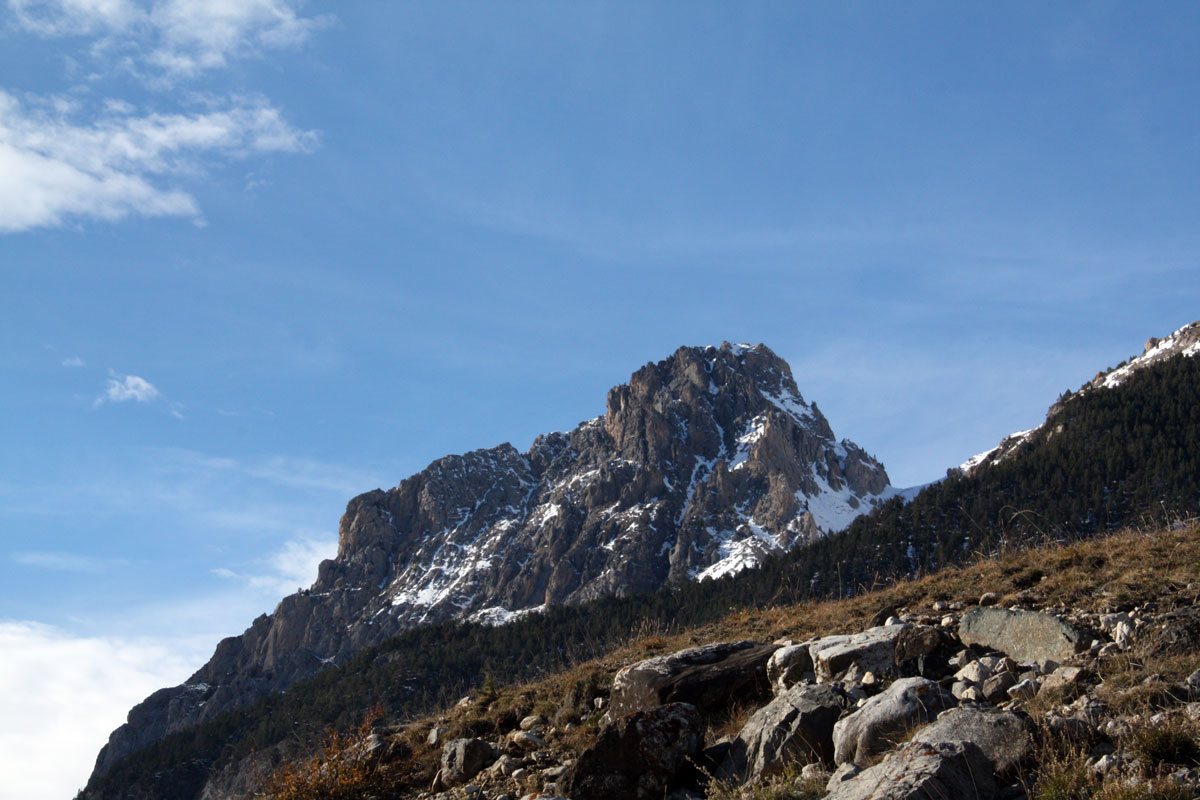 The mountain of Assan, with the peak of the same name, separates the valley of the Cristillan from the Combe du Queyras. Only experienced hikers should attempt the summit itself - called Pic d'Assan or Pic de Guillestre. 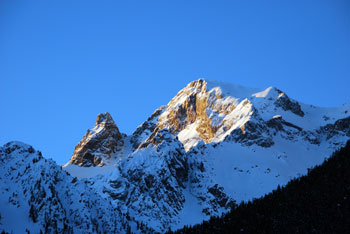 The dolomitic crags of Crête de la Font Sancte lie on the border with the Alpes-de-Haute-Provence. Their highest summits, at 3,371m and 3,385m, are the highest points of the Queyras. They owe their name to the ‘font sancte’ or holy spring which wells up at 2,360 metres in the valley of the Rif Bel. The mountain of Font Sancte is a major landmark that you can see from the Arvieux valley.

On the Crête des Chambrettes, close to Col Fromage, there is an optical signalling-post which was erected in the nineteenth century to send messages quickly from the south of France to Paris. Other posts set up at Clot la Cime above the col d'Izoard near Arvieux, and above Col de la Crèche near Château-Ville-Vieille, have disappeared, all made obsolete by the telephone. 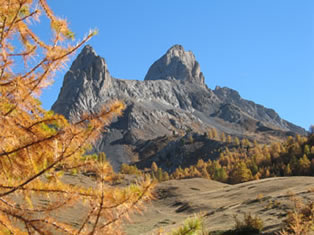 ‘Les Mamelles’ (The Breasts) is the name often given to Pointe de la Selle (2,745m), which rises above Col Fromage (2,301m) at Ceillac. A stunning view of the mountain may be had from the GR58 (Tour du Queyras) path when coming from the Château Queyras direction. 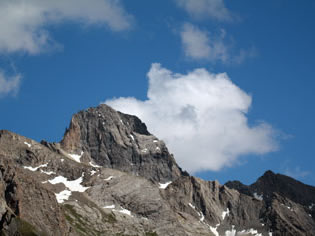 Péouvou, situated between Col de Clausis and Col des Ugousses, is a limestone mountain which towers over the Ubaye. At its foot are gentler slopes of glossy schist (Col and Lac de Clausis). The way up is from Ceillac via the valley of the Cristillan. 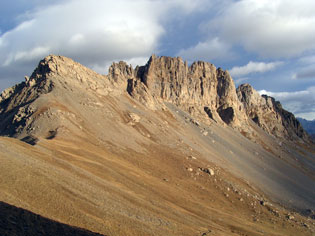 The crags of the Crête (Ridge) de Croseras overlook Villargaudin and the Combe du Guil. There’s a stark contrast with the gentler slopes of the Chalets de Furfande. Older folk call this crest the ‘rocher de maranetch’ or Bad-Night Crest, and it’s something of a mystery how the name Croseras came to be on maps. 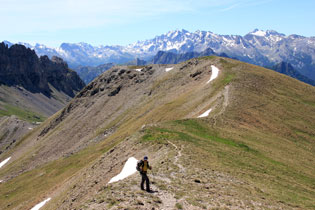 The pic du Gazon is easy to reach from the chalets at Furfande or from the Col de Furfande (2,503m). It offers a lovely view over the Oisans mountains in the Hautes-Alpes and Crête de Croseras. 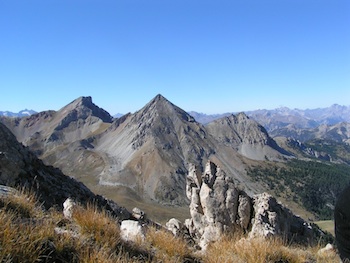 Clot la Cîme is the mountain which dominates the Col d'Izoard to the north. In dialect a ‘clot’ – a word often found in Queyras place-names – refers to a shelf or flat area of land. At the top of Clot la Cîme you can still see the remains of a military site and perhaps of an optical signalling-post which communicated with the one on the Cretes de Chambrettes at  Col Fromage. 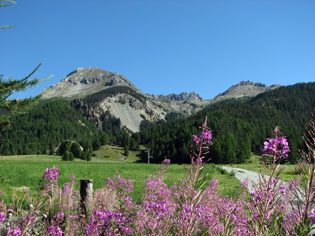 Côte Belle, or Coste Belle, is the Arvieux mountain which, south of the Col d’Izoard, overlooks Lac de Souliers. You can picnic at the lake’s edge before beginning the climb. The path is steep, but the view from the summit in clear weather carries as far as the Barre des Ecrins and Mont Blanc. From up there, the Col d'Izoard looks tiny with its miniature cars and its ant-like walkers. 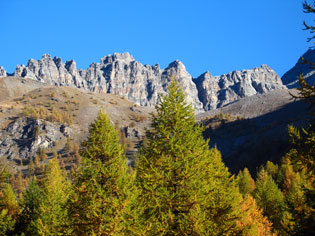 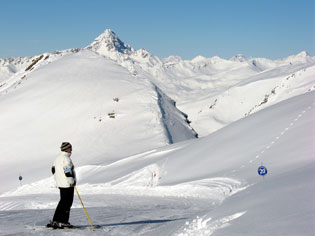 The dolomitic Pic de Rochebrune above Arvieux is the second-highest summit in the Queyras after Font Sancte (3,385 m), Monte Viso (3,841 m) being over the border in Italy. This peak may be reached from Col d'Izoard but the climb is difficult and should be attempted only by experienced mountaineers. 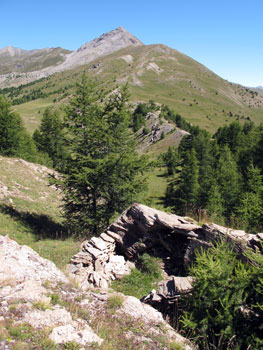 Pic de l'Agrenier near Château-Ville-Vieille is reached from Meyriès. Go along the driveable track which leads to the Bergerie (sheepfold) de Péas, and from there take the path which leads to Col de la Crèche. 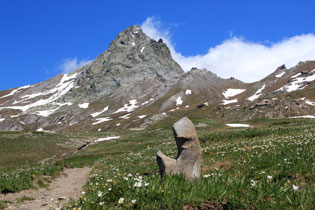 Bric Bouchet above Abriès, at just under 3000 metres, towers above its surroundings and faces Monte Viso. Like other peaks once thought to be unclimbable, such as Dent de Ratier above Arvieux, Pelvas above Abriès or Crête de la Taillante near Ristolas, Bric Bouchet was conquered by the mountaineer Paul Guillemin in 1875 – but he found that an Italian team had beaten him to it by a few weeks. 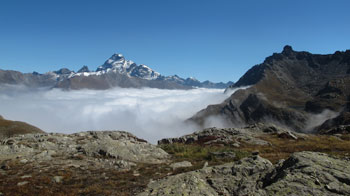 Monte Viso, an immense basalt pyramid situated just over the border in Italy, is the highest point of the southern Alps. It is head and shoulders above the neighbouring mountains which are 500m lower. Its name, like Vesontio ((Besançon) and Mount Vesuvius, is pre-Roman in origin, and indicates a high point. 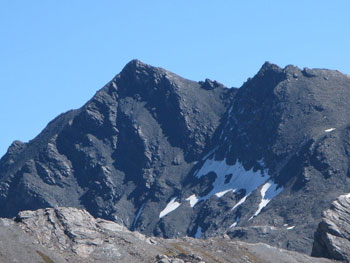 Mont Aiguillette is one of the mountains marking the border between France and Italy. It is on the edge of the upper Guil valley. To climb it you must start from l’Echalp near Ristolas. 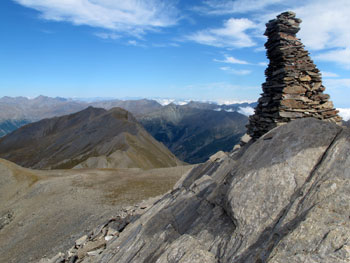 Pic Foréant, which rises above the valley of Bouchouses and its lakes, can be reached via Col Agnel, Col Vieux or Ccol de l'Eychassier. Return via Lacs de l'Eychassier nd the Foréant mountain stream until you reach the lake of the same name, and there link up with the GR58 (Tour du Queyras) which will lead you to the village of Ristolas. 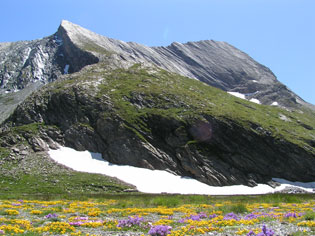 Crête (Ridge) de la Taillante is a great wave of stone extending over 4 kilometres. More exactly it is a stack of thin white marble strata high above the lakes of Foréant and Egorgéou. For experienced mountaineers only. 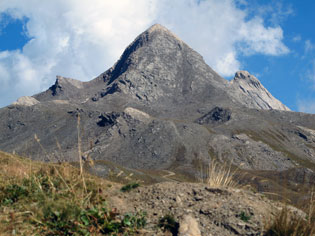 The Pain de Sucre, like Crête de la Taillante (3,197m), is a stack of white marble strata above the glossy schist of col Agnel. It is reached via Col Vieux (2,806m). The views over Italy on cloud-free days, taking in Monte Viso (3,841m) and Pic d'Asti (2,925 m), are unrivalled. Beware of rockfalls on days when the mountain is busy with climbers. 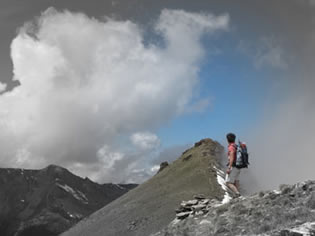 The Gardiole de l’Alp towers over Molines-en-Queyras and the summit is visible from the village. You can take a loop starting from Pierre Grosse, passing over the summit and coming down to FontGillarde, or vice versa. From the cross at the summit, you will see Pic de Rochebrune (Arvieux), Pic de Château Renard (Saint Véran) and Font Sancte (Ceillac). 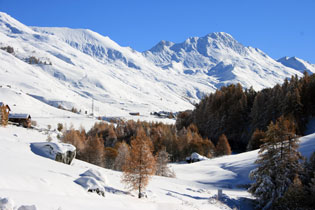 The Grand Queyras is climbed from Molines-en-Queyras on the route to Col Agnel. Leave your car at Pont de l’Ariane above Fontgillarde. The climb (1,050m) is considerable and the path almost non-existent. For experienced climbers only. 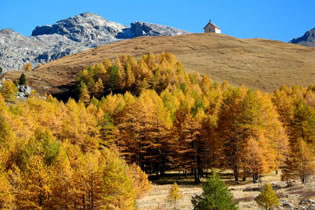 Situated on the GR58 Tour du Queyras, the Chapelle de Clausis is the starting-point for many walks, for example to Pic de Caramantran (3,025 m) or Lacs Blanchet (2,746 et 2,810 m). In summer you can shorten the walk by taking the shuttle bus from Saint-Véran. 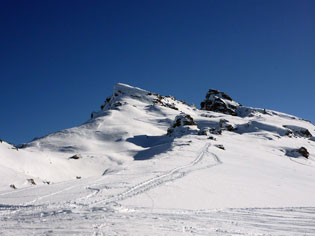 The Pic de Châteaurenard is well known to astronomers because of the Observatory of Saint-Véran, the village ‘where roosters peck at the stars’. The mountain is easily climbed and the view from the top is magnificent. In summer the slopes are filled with marmots and edelweiss. 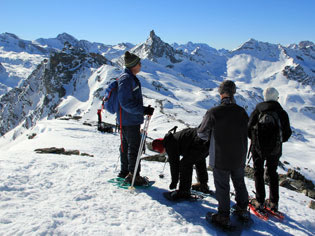 The Pic de Caramantran is one of the easiest 3000m-plus mountains to climb in the Queyras. It is reached from  Col Agnel (2,744m) via Col de Chamoussière (2,884m). From the summit there is a splendid view over Monte Viso and Tête des Toilies. 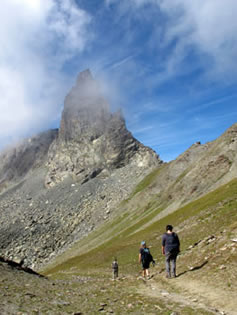 La Tête des Toilies, at the head of the valley of Aygue Blanche, is a pyramid of basalt, a hard, erosion-resistant rock. This climb is for experienced climbers only. The summit is reached from the Chapelle de Clausis (2,366m) and Lac de la Blanche (2500 m). Instead of climbing it you can admire its reflection in the Blanchet Lakes (2,746 and 2,810m) at its feet. 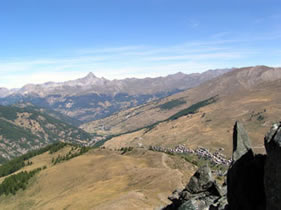 To climb Pic de Cascavelier, start from Le Raux de Saint-Véran, cross the stream at the Mill bridge (pont du Moulin), and go along the GR58 for another 100 metres. Pressing on beyond the Cabane de Lamaron, continue to La Croix and you are on the Curet summit ridge. 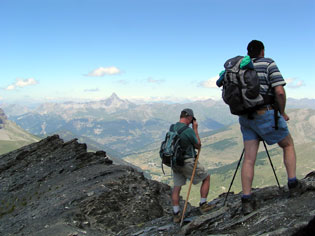 Start from Le Raux de Saint-Véran, follow the trail to Pic de Cascavelier, but then turn aside from the summit and take the gap between the Jaquette summit and Pointe des Marcelettes.

The Chalets of Clapeyto are the summer-pasture chalets belonging to the people of Brunissard and La Chalp near Arvieux. Traditionally, after the July haymaking, the hay was stored in these chalets before being brought down in October. While parents toiled in the fields (‘seven months of winter, five months of hell’, as the saying goes), children were sent ‘up the mountain’ with their grandmothers to look after the cows. 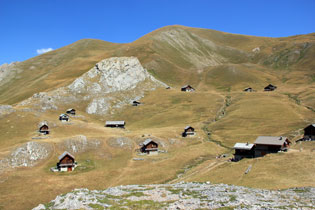 As at Clapeyto, the chalets of Furfande were all used for the storage of hay. Because of the steep slopes here, games of boules are played with square boules. There is a championship every year during the Furfande gala (‘la fête de Furfande’). 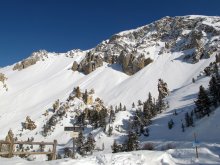