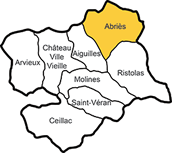 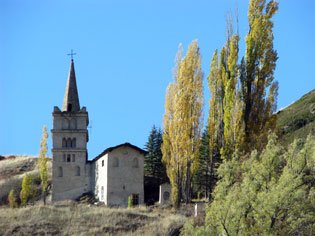 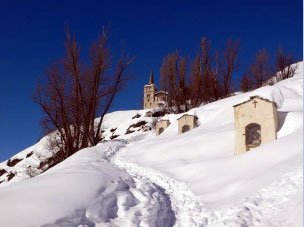 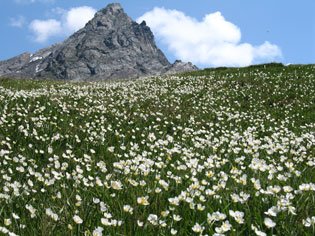 Abriès probably owes its name to the expression ‘close to the brics’ (mountain peaks). Indeed, it is situated at the foot of Bric Froid and Bric Bouchet. Over time the name would have changed from Abrii to Abrici, to Abriès. The name may also be Provençale in origin from ‘abria’, to shelter. Other historians think that it comes from the Latin aper, or boar - no doubt a man’s name, with the suffix arium indicating property.

Situated where the valleys of the Haut Guil and the Bouchet meet, not far from Piedmont in Italy (see the Queyras panorama), Abriès was for a long time the only market town of the Queyras - a market having been established there by the Dauphin de Vienne in 1259. Today the Mairie and post office occupy a building which was once a covered sheep market.

In 1855 Abriès lost its priviledged commercial position when the road along the river Guil was opened. However the town continued to attract French and foreign tourists keen on mountain holidays - especially climbers.

Today Abriès is one of several village resorts in the Queyras. In winter you can go skiing - downhill or Nordic (see the map of the ski area), - and snow-shoeing (raquettes). 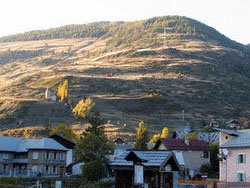 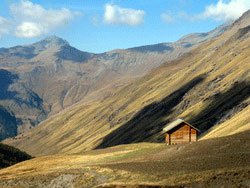 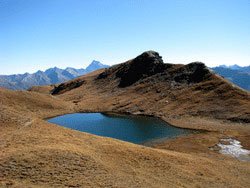 In the 19th century, when Abriès had a considerably larger population (in 1830 there were 1,800 inhabitants as opposed to only 430 today), a number of hamlets grew up in the commune, such as Le Roux, Valpreveyre, Le Villard, Les Bertins, Le Tirail, Le Cros, La Montette, Malrif and Pré Roubaud.

Many of these settlements have since disappeared. Only Le Roux is inhabited all year round, while in Valpreveyre a few houses are opened up in summer. 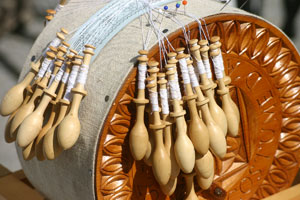 In the  Museum of Traditional costume, close to the Eglise (church) Saint-Pierre, you will see the clothes that the people of the Queyras used to wear.

You can also learn how to make lace.

In the sixteenth century the wars of religion set Catholics against Protestants. After the capture of Fort Queyras by Lesdiguières in 1587, the whole of the Queyras, and Abriès in particular, turned towards Protestantism. When the Edict of Nantes was revoked in 1685, between 60 and 80 per cent of the population of Abriès was Protestant. Some of them, as a result of persecution, converted to Catholicism –or at least pretended to hoping for better times. Others – about 30 per cent of Abriès’s population – left their goods behind and fled by night to Italy across the nearby frontier at Col des Thures or Col Saint-Martin. From there they went on through Switzerland to make their homes in Germany - for example in Wurmberg in Bad-Wurtemberg and Carlsdorf in Hesse, where their descendants still keep alive the memory of their forefathers from the distant Queyras mountains. 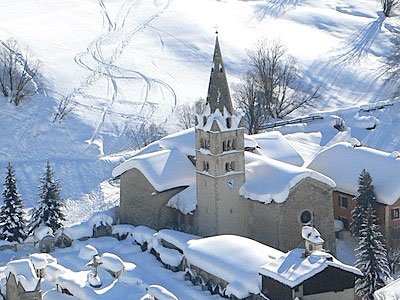 Situated in the upper part of the town, the Eglise (Church) Saint-Pierre was rebuilt in the sixteenth century; its altarpiece and painted decoration date from the nineteenth. Two stone lions hold up the pillars of the church porch. 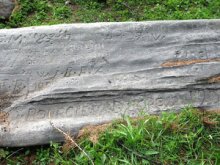 Abriès differs from other villages of the Queyras because of the many inscribed stones you can see as you go round the streets. One of them has a poem addressing the Bouchet, a terrifying mountain torrent that caused devastating floods in the 18th century:

”Bouchet, if I don’t lose my footing / I’m not scared of you / I have four fathoms under me / I laugh at you.”

Have a look at the map of the skiable areas 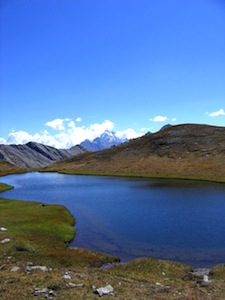 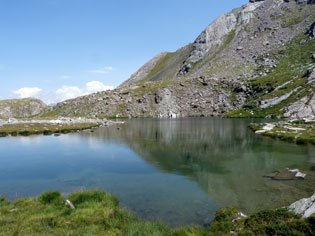 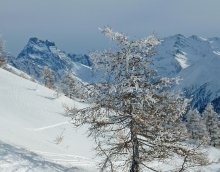